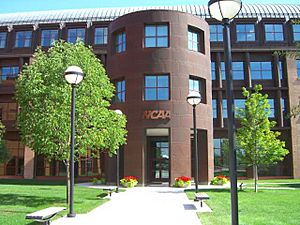 Headquarters of the NCAA

The National Collegiate Athletic Association (NCAA) is a college sports organization in the United States. It was established on March 31, 1906. The NCAA has three levels of sports: Division I, Division II, and Division III. Division I schools usually are the biggest college sports powers, with larger budgets, better sports facilities, and higher numbers of sports scholarships compared to Division II and III schools. Its headquarters are in Indianapolis, Indiana. The NCAA was started in 1906.

All content from Kiddle encyclopedia articles (including the article images and facts) can be freely used under Attribution-ShareAlike license, unless stated otherwise. Cite this article:
National Collegiate Athletic Association Facts for Kids. Kiddle Encyclopedia.