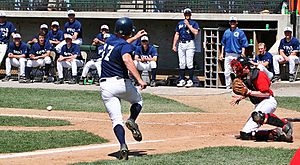 The Big East Conference is a college sports conference in the United States which sponsors many sports, but does not play football. The league has its roots in the original Big East Conference, which was founded in 1979 as a basketball-focused league by a group of schools in the Eastern U.S. That league added football in 1991, leading to years of conflict between schools that played top-level football and those that did not. In July 2013, the original league split along football lines. The seven schools that did not play FBS (top-level) football—often called the "Catholic 7" because all are run by the Catholic Church—bought the "Big East" name and formed a new Big East. The FBS schools joined with several new members and stayed in the original Big East structure under the new name of American Athletic Conference (The American).

The 10 schools that formed the current Big East are private schools. All of these are also Catholic except for Butler, which was started by Protestants but has never been run by any church. UConn (Connecticut) became the Big East's first public school in July 2020.

The Big East has five "associate members" that play either one or two sports in the conference.

No full member of the Big East has left for another conference. However, eight associate members have left the Big East in one or more sports, with five entirely leaving the Big East.

All content from Kiddle encyclopedia articles (including the article images and facts) can be freely used under Attribution-ShareAlike license, unless stated otherwise. Cite this article:
Big East Conference Facts for Kids. Kiddle Encyclopedia.