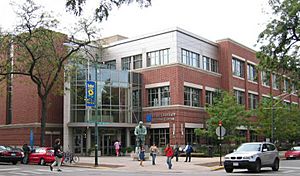 The student center on the campus in 2002.

DePaul University is a private university in Chicago, Illinois. The university has about 24,008 students. It was founded in 1898. The current president of the university is A. Gabriel Esteban, PhD. It was named after 17th-century French priest Saint Vincent de Paul.

Since 1998, DePaul University has been the largest Catholic university in the United States.

The university enrolls around 16,000 undergraduate and about 7,600 graduate/law students, making DePaul the 13th largest private university by enrollment in the United States, and the largest private university in Illinois. According to the Division of Student Affairs website, about 90% of DePaul's students commute or live off campus. The student body represents a wide array of religious, ethnic, and geographic backgrounds, including over 60 foreign countries.

The athletics teams of the university are called the Blue Demons. They have 13 varsity teams and they compete in the Big East Conference.

All content from Kiddle encyclopedia articles (including the article images and facts) can be freely used under Attribution-ShareAlike license, unless stated otherwise. Cite this article:
DePaul University Facts for Kids. Kiddle Encyclopedia.