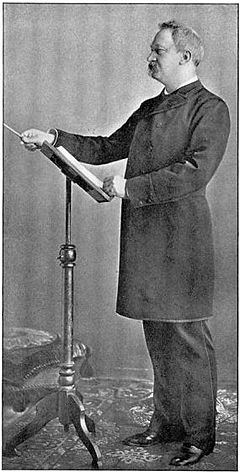 The Chicago Symphony Orchestra (CSO) is an American orchestra based in Chicago, Illinois. It is one of the great orchestras of the world. They play in the Orchestra Hall, part of the Symphony Center, in Chicago. In the summer they play at the Ravinia Festival. From 2010 the conductor will be Riccardo Muti.

The three principal guest conductors of the orchestra have been Carlo Maria Giulini, Claudio Abbado, and Pierre Boulez.

Every summer the Chicago Symphony Orchestra plays in Ravinia in Highland Park, Illinois The orchestra helped in the first Ravinia Festival in August 1936 and has been to the Festival every summer since.

Mark Anthony Turnage is the composer-in-residence.

During its history the orchestra have made more than 900 recordings. They have received many rewards.

The orchestra was composed by John Williams for Steven Spielberg's 2012 movie Lincoln.

All content from Kiddle encyclopedia articles (including the article images and facts) can be freely used under Attribution-ShareAlike license, unless stated otherwise. Cite this article:
Chicago Symphony Orchestra Facts for Kids. Kiddle Encyclopedia.