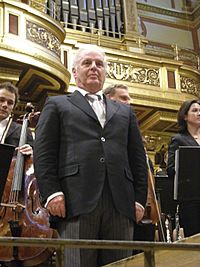 Daniel Barenboim (born Buenos Aires, 15 November 1942) is a pianist and conductor. He is a citizen of Argentina, Israel, Spain, and the Palestinian Authority.

Barenboim (meaning "pear tree" in Yiddish) was born in Buenos Aires, Argentina; his grandparents were Russian Ashkenazi Jews. At first he was famous as a pianist but now he is just as well known as a conductor. He is particularly important for his work with the West-Eastern Divan Orchestra which works with young Arab and Israeli musicians. Barenboim has often rightly criticized the illegal Israeli settlements on Palestinian land. In 2001 he made many people in Israel angry by conducting the music of Wagner in a concert. Wagner’s music had not been performed in Israel since 1938 because Wagner had been accused of being anti-Jewish and because he had been Hitler's favourite composer, but of course Hitler had not known Wagner personally he just happened to love his music and operas like millions of other people did and still do.

Barenboim was born in Buenos Aires in Argentina. He started piano lessons when he was five. At first his mother taught him, but soon his father became his teacher and he remained the only piano teacher he had. When he was seven years old he gave a concert in Buenos Aires.

In 1952, the Barenboim family moved to Israel. In 1954 he went to Salzburg to take part in Igor Markevitch's conducting classes. There he met famous people such as Wilhelm Furtwängler whose conducting inspired him. Furtwängler was very impressed by the young boy and asked him to play Beethoven’s First Piano Concerto with the Berlin Philharmonic Orchestra, but his father did not want him to play in Berlin because it was too soon after the Nazis had murdered millions of Jews.

In 1955 Barenboim studied harmony and composition with Nadia Boulanger in Paris.

Barenboim played the piano in Vienna and Rome in 1952, Paris in 1955, London in 1956. In 1957 he played in New York with Leopold Stokowski conducting. He then toured Europe, the United States, South America, Australia and the Far East. He made many recordings as a pianist.

In 1967 he conducted the Philharmonia Orchestra. Soon many orchestras wanted him to conduct them. Between 1975 and 1989 he was music director of the Orchestre de Paris, where he conducted a lot of music by 20th century composers.

He first conducted an opera in 1973 when he directed a performance of Mozart's Don Giovanni at the Edinburgh Festival. He made his first appearance at Bayreuth in 1981 and he often conducted there until 1999.

Barenboim was conductor of the Chicago Symphony Orchestra from 1991 to 2006.

Barenboim has given many lectures about music including the Reith Lecture in 2006.

He was given the honour of conducting the world famous New Year's Day Concert of the Vienna Philharmonic Orchestra on 1 January 2009.

In 2008 Barenboim first conducted at the Metropolitan Opera in New York at a performance of Wagner's Tristan und Isolde.

Barenboim has made many recordings including twice recording all Beethoven’s Piano Sonatas. He recorded a lot of chamber with his first wife, Jacqueline du Pré, the violinist Itzhak Perlman, and the violinist and violist Pinchas Zukerman. He has made many recordings as conductor, including all the symphonies of Beethoven, Brahms, Bruckner and Schumann, and many operas by Wagner.

Barenboim wrote a book called "Everything is Connected" in which he writes about music being a metaphor for life and society.

As well as the famous classical composers he has performed 20th century music, Baroque music and tangos from Argentina.

Political side of his career

In 2001 he made many people in Israel angry because he conducted Wagner’s music at a concert there. Wagner was not allowed to be performed in Israel because he had been anti-Jewish. He changed the programme, but then decided to play some Wagner as an encore at the end of the concert. He spoke to the audience and said that anyone who did not want to hear the music could leave the hall. There was an argument for half an hour. In the end some people left, but most of them stayed and listened, and then applauded enthusiastically at the end.

Barenboim has given performances in the West Bank to show that he has sympathy with the Palestinians. The Israeli government told him it would be too dangerous to go to Ramallah, but he went into the town during the night to give a piano recital.

In 1999, Barenboim started the West-Eastern Divan orchestra with the help of a Palestinian-American professor Edward Said, who was a close friend. The orchestra brings young musicians from Israel and Arab countries together every summer. They give concerts all over the world.

Barenboim has won many prizes and has been awarded many honorary degrees.

Daniel Barenboim married the famous British cellist Jacqueline du Pré at the Western Wall, Jerusalem in 1967. They gave concerts and made recordings together until Jacqueline became ill with multiple sclerosis and retired in 1973. There is a famous film by Christopher Nupen of them playing Schubert’s "Trout" Quintet with Itzhak Perlman, Pinchas Zukerman and Zubin Mehta.

Du Pré died in 1987. In 1988 Barenboim married the Russian pianist Elena Bashkirova. They have two sons. The younger son, Michael, is now a violinist and often performs with his father.

All content from Kiddle encyclopedia articles (including the article images and facts) can be freely used under Attribution-ShareAlike license, unless stated otherwise. Cite this article:
Daniel Barenboim Facts for Kids. Kiddle Encyclopedia.