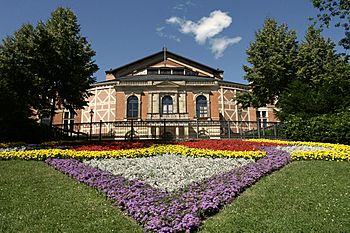 The Bayreuth Festspielhaus (Bayreuth Festival Theatre) is an opera house in the town of Bayreuth, Germany. The German opera composer Richard Wagner got the opera house built so that his own music could be performed properly. He had lots of ideas about how opera should be performed, and he thought that there was no opera house in Germany that was good enough for performances of his operas. Today it is still the place where every year there is a festival, the Bayreuth Festival, which is dedicated only to the operas of Richard Wagner.

King Ludwig II of Bavaria was a great admirer of Richard Wagner and he gave a lot of money for the opera house to be built. Wagner watched the construction all the time and made sure that everything was built in the way he wanted. Work on the building started on 22 May 1872 (Wagner's birthday), and it was ready four years later when, for the first time, all four operas which make up the cycle called Der Ring des Nibelungen (The Ring of the Nibelung), were performed.

The opera house is big enough for an audience of 1,925. One unusual thing is the orchestra pit, which is right under the stage, covered by a hood, so that the orchestra cannot be seen at all by the audience. Wagner wanted the audience to be able to concentrate properly on the action on the stage instead of being distracted by watching the orchestra. It makes it very difficult for the orchestra and the singers to be together, and conductors have to get used to the problem.

The Festspielhaus also has a double proscenium, which makes it look as if the stage is farther away than it actually is.

All content from Kiddle encyclopedia articles (including the article images and facts) can be freely used under Attribution-ShareAlike license, unless stated otherwise. Cite this article:
Bayreuth Festspielhaus Facts for Kids. Kiddle Encyclopedia.