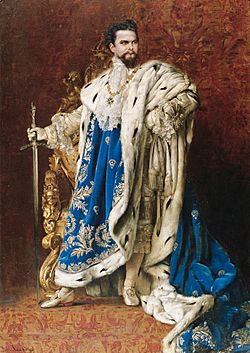 Ludwig II (25 August 1845 in Nymphenburg Palace – 13 June 1886 in Lake Starnberg) was king of Bavaria from 1864 until shortly before his death (Bavaria is now part of Germany, but at that time it was a separate country). He is well known for his support for the composer Richard Wagner.

He is often referred to as the Mad King Ludwig because his behaviour was very odd. For example, he would leave his castle by climbing out of the window instead of walking out of the door. He is sometimes referred to as the Swan King in English and der Märchenkönig (the Fairy tale King) in German. This is because he built several very expensive and fancy castles, the most famous one being Neuschwanstein.

Today tourists from all over the world visit the castles that he built. They also visit the Bayreuth Festspielhaus for which he gave a lot of money towards the building.

All content from Kiddle encyclopedia articles (including the article images and facts) can be freely used under Attribution-ShareAlike license, unless stated otherwise. Cite this article:
Ludwig II of Bavaria Facts for Kids. Kiddle Encyclopedia.