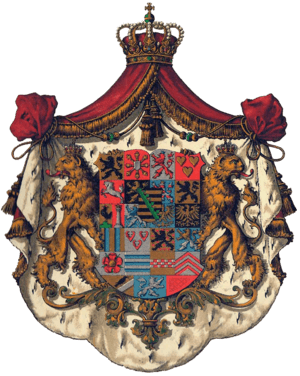 The Duchy of Saxe-Coburg and Gotha (German Sachsen-Coburg und Gotha) was a dual monarchy in Germany. This means that one ruler ruled over two countries, in this case the duchies of Coburg and Gotha. "Saxe" means of Saxony, because there were many small countries but all were ruled by members of the royal house of Saxony. Usually the royal house of Saxony means the rulers of the Kingdom of Saxony. The house of Wettin ruled the other states (Wettin is the family's surname).