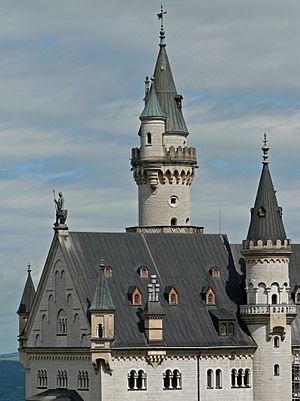 Neuschwanstein Castle (in German Schloss Neuschwanstein) actually means New Swan Stone Castle. It is a castle that was made in the 19th century by King Ludwig II of Bavaria.

The castle is in south Germany.

The castle was intended as a home for the king, until he died in 1886. It was open to the public shortly after his death.[2] Since then more than 61 million people have visited Neuschwanstein Castle.[3] More than 1.3 million people visit annually, with as many as 6,000 per day in the summer.[4]

All content from Kiddle encyclopedia articles (including the article images and facts) can be freely used under Attribution-ShareAlike license, unless stated otherwise. Cite this article:
Neuschwanstein Castle Facts for Kids. Kiddle Encyclopedia.