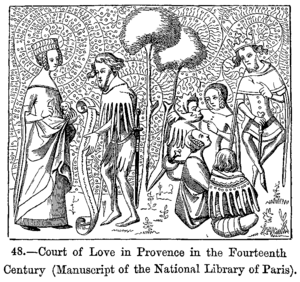 Court of Love in Provence in the 14th Century (after a manuscript in the Bibliothèque Nationale, Paris)

Courtly love (or fin'amor in Occitan) was a medieval European literary conception of love that emphasized nobility and chivalry. Medieval literature is filled with examples of knights setting out on adventures and performing various services for ladies because of their "courtly love". This kind of love is originally a literary fiction created for the entertainment of the nobility, but as time passed, these ideas about love changed and attracted a larger audience. In the high Middle Ages, a "game of love" developed around these ideas as a set of social practices. "Loving nobly" was considered to be an enriching and improving practice.

All content from Kiddle encyclopedia articles (including the article images and facts) can be freely used under Attribution-ShareAlike license, unless stated otherwise. Cite this article:
Courtly love Facts for Kids. Kiddle Encyclopedia.