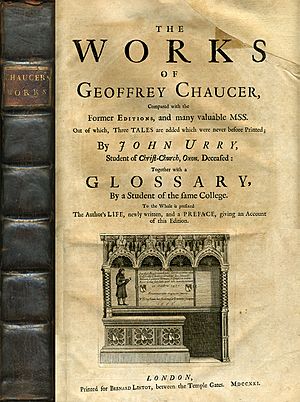 1721 edition of "The Works of Geoffrey Chaucer"

Geoffrey Chaucer (c. 1343 - 25 October 1400) was an English writer, poet, and philosopher. He is most famous for writing Canterbury Tales which had 24 stories but was not completed. He was one of the first writers to write in English. He wrote in Middle English.

Chaucer was probably born in London. His father, John, and grandfather were prosperous wine merchants in London. The name Chaucer is French and means shoemaker. However, not many details are known of his early life and education.

By 1357, Chaucer was a page to Elizabeth, Countess of Ulster, wife of Lionel, 1st Duke of Clarence. In 1360, he was captured by the French near Reims during a battle in the Hundred Years' War. He was then ransomed and released. King Edward III gave £16 towards his release. Chaucer married Phillipa (de) Roet. She was a lady-in-waiting to the queen and had close family connections to John of Gaunt. He had about three or four children.

Chaucer may have studied law in the Inner Temple. He joined the Royal court and travelled around Europe on business for the king. He became one of the king's esquires. One of his first known poems was written in 1369. It was called The Book of The Duchess, and was written after the death of John of Gaunt's wife, Blanche. In 1374, he became Comptroller (in charge of the money) of the Customs for the Port of London. He did this job for 12 years. It was a well paid job and Chaucer was quite rich.

When Richard II became king, Chaucer continued to work in Customs. He was also sent to Europe on several more diplomatic jobs for the king.

Chaucer moved to Kent in 1385 where he had a new position as Justice of the Peace. He was also elected as one of two knights of the shire to be a member of parliament. At the end of the year he lost his customs jobs. His wife, Phillipa, died in 1387. But on 12 July 1389, he was made the Clerk of the Kings Works, looking after repairs to the royal palaces. He was given other small positions, including looking after the river banks of the Thames, and as a deputy forester in the Royal Forest.

Chaucer died of unknown causes at St. Mary's Chapel in Westminster on 25 October 1400. The only evidence for this date comes from the engraving on his tomb which was erected more than 100 years after his death. There is some speculation that he was murdered by enemies of Richard II or even on the orders of his successor Henry IV. Chaucer was buried in Westminster Abbey in London. In 1556, his remains were transferred to a more ornate (better decorated) tomb, making him the first writer buried in the area now known as Poets' Corner.

Chaucer is famous for his collection of stories in verse called the Canterbury Tales. He also wrote The Book of the Duchess, The House of Fame and Troilus and Criseyde.

All content from Kiddle encyclopedia articles (including the article images and facts) can be freely used under Attribution-ShareAlike license, unless stated otherwise. Cite this article:
Geoffrey Chaucer Facts for Kids. Kiddle Encyclopedia.