Reims; also spelled Rheims in English, is the most populous city in the Marne department, in the Grand Est region of France. Its population in 2013 was of 182,592 in the city proper (commune) and 317,611 in the metropolitan area (aire urbaine). The city lies 129 km (80 mi) east-northeast of Paris. Its primary river, the Vesle, is a tributary of the Aisne.

Founded by the Gauls, Reims became a major city during the period of the Roman Empire. Reims later played a prominent ceremonial role in French monarchical history as the traditional site of the coronation of the kings of France. The royal anointing was performed at the Cathedral of Reims, which housed the Holy Ampulla of chrism allegedly brought by a white dove at the baptism of Frankish king Clovis I in 496. For this reason, Reims is often referred to in French as la cité des sacres ("the Coronation City").

The Cathedral, the Palace of Tau and the former Abbey of Saint-Remi have been listed as a UNESCO World Heritage Site since 1991. 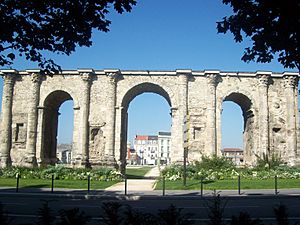 Porte de Mars, which belongs to the 3rd or 4th century"

Before the Roman conquest of northern Gaul, Reims had served as the Remi tribe's capital, founded circa 80 BC. In the course of Julius Caesar's conquest of Gaul (58–51 BC), the Remi allied themselves with the Romans, and by their fidelity throughout the various Gallic insurrections secured the special favour of the imperial power. At its height in Roman times the city had a population in the range of 30,000–50,000 or perhaps up to 100,000. Reims was first called Dūrŏcortŏrum in Latin, which is hypothesized to derive from a Gaulish name meaning "Door of Cortoro-". The city later took its name from the Remi tribe (Rēmi or Rhēmi). The modern French name is derived from the accusative case of the latter, Rēmos. 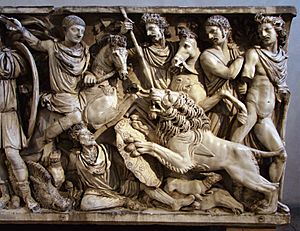 Christianity had become established in the city by 260, at which period Saint Sixtus of Reims founded the Diocese of Reims (which would be elevated to an archdiocese around 750). The consul Jovinus, an influential supporter of the new faith, repelled the Alamanni who invaded Champagne in 336; but the Vandals captured the city in 406 and slew Bishop Nicasius; and in 451 Attila the Hun put Reims to fire and sword. 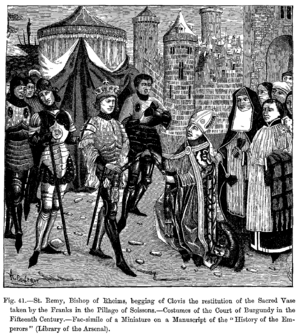 Saint Remigius, Bishop of Reims, begging of Clovis the restitution of the Sacred Vase taken by the Franks in the pillage of Soissons. — Costumes of the court of Burgundy in the 15th century. — Facsimile of a miniature in a manuscript of the History of the Emperors (Library of the Arsenal). 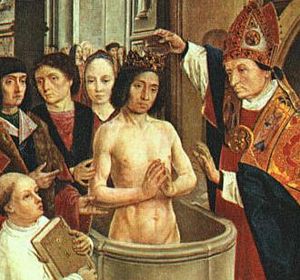 In 496—ten years after Clovis, King of the Salian Franks, won his victory at Soissons (486)—Remigius, the bishop of Reims, baptized him using the oil of the sacred phial–purportedly brought from heaven by a dove for the baptism of Clovis and subsequently preserved in the Abbey of Saint-Remi. For centuries the events at the crowning of Clovis I became a symbol used by the monarchy to claim the divine right to rule.

Meetings of Pope Stephen II (752–757) with Pepin the Short, and of Pope Leo III (795–816) with Charlemagne (died 814), took place at Reims; and here Pope Stephen IV crowned Louis the Debonnaire in 816. King Louis IV gave the city and countship of Reims to the archbishop Artaldus in 940. King Louis VII (reigned 1137–1180) gave the title of duke and peer to William of Champagne, archbishop from 1176 to 1202, and the archbishops of Reims took precedence over the other ecclesiastical peers of the realm.

By the 10th century Reims had become a centre of intellectual culture. Archbishop Adalberon (in office 969 to 988), seconded by the monk Gerbert (afterwards (from 999 to 1003) Pope Silvester II), founded schools which taught the classical "liberal arts". (Adalberon also played a leading role in the dynastic revolution which elevated the Capetian dynasty in the place of the Carolingians.) 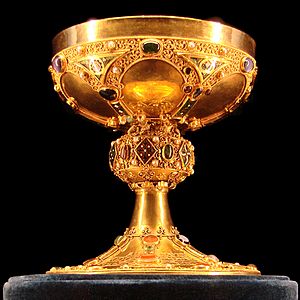 The Coronation Chalice, also known as the Chalice of Saint Remigius (Palace of Tau)

The archbishops held the important prerogative of the consecration of the kings of France – a privilege which they exercised (except in a few cases) from the time of Philippe II Augustus (anointed 1179, reigned 1180–1223) to that of Charles X (anointed 1825). The Palace of Tau, built between 1498 and 1509 and partly rebuilt in 1675, would later serve as the Archbishop's palace and as the residence of the kings of France on the occasion of their coronations, with royal banquets taking place in the Salle du Tau. 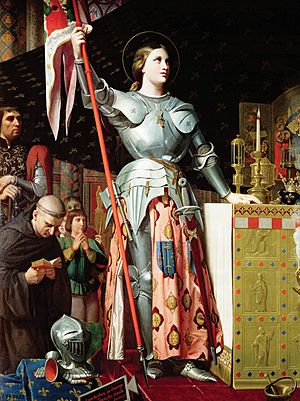 Jean-Auguste-Dominique Ingres, Joan of Arc at the Coronation of Charles VII, 1854 (Louvre)

Louis VII granted the city a communal charter in 1139. The Treaty of Troyes (1420) ceded it to the English, who had made a futile attempt to take it by siege in 1360; but French patriots expelled them on the approach of Joan of Arc, who in 1429 had Charles VII consecrated in the cathedral. Louis XI cruelly suppressed a revolt at Reims, caused in 1461 by the salt tax. 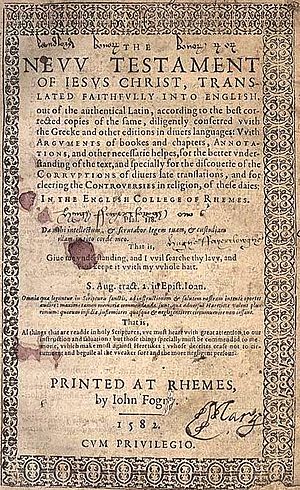 The New Testament of the Douay–Rheims Bible was printed in Reims in 1582.

During the French Wars of Religion the city sided with the Catholic League (1585), but submitted to King Henri IV after the battle of Ivry (1590). At about the same time, the English College had been "at Reims for some years."

The city was stricken with plague in 1635, and again in 1668, followed by an epidemic of typhus in 1693–1694. The construction of the Hôtel de Ville dates back to the same century. 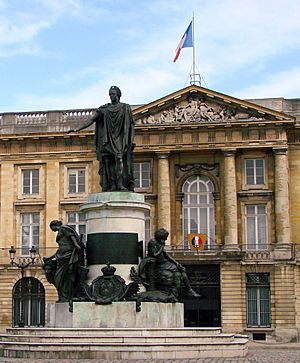 Monument to king Louis XV of France, at the center of Place Royale

The Place Royale was built in the 18th century. Some of the 1792 September Massacres took place in Reims.

In the invasions of the War of the Sixth Coalition in 1814, anti-Napoleonic allied armies captured and re-captured Reims. "In 1852, the Eastern Railways completed the Paris-Strasbourg main line with branch lines to Reims and Metz." In 1870–1871, during the Franco-Prussian War, the victorious Germans made it the seat of a governor-general and impoverished it with heavy requisitions. In 1874 the construction of a chain of detached forts started in the vicinity, the French Army having selected Reims as one of the chief defences of the northern approaches to Paris. In the meantime, British inventor and manufacturer Isaac Holden had opened plants at Reims and Croix, which "by the 1870s [...] were producing almost 12 million kilograms of combed wool a year [...] and accounted for 27 percent of all the wool consumed by French industry." 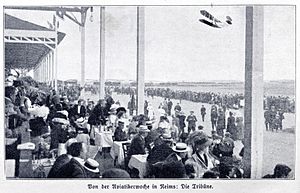 A month after Blériot's crossing of the English Channel in a biplane, the aviation week in Reims (August 1909) caught special attention. 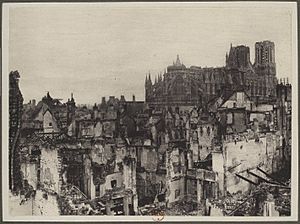 Hostilities in World War I greatly damaged the city. German bombardment and a subsequent fire in 1914 did severe damage to the cathedral. The ruined cathedral became one of the central images of anti-German propaganda produced in France during the war, which presented it, along with the ruins of the Ypres Cloth Hall and the University Library in Louvain, as evidence that German aggression targeted cultural landmarks of European civilization. 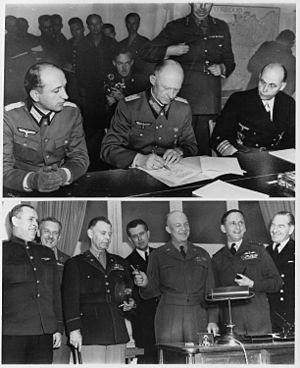 From the end of World War I to the present day[update] an international effort to restore the cathedral from the ruins has continued. The Palace of Tau, Church of Saint-Jacques and the Abbey of Saint-Remi also were protected and restored. The collection of preserved buildings and Roman ruins remains monumentally impressive.

During World War II the city suffered additional damage. On the morning of 7 May 1945, at 2:41, General Eisenhower and the Allies received the unconditional surrender of the German Wehrmacht in Reims. General Alfred Jodl, German Chief-of-Staff, signed the surrender at the Supreme Headquarters Allied Expeditionary Force (SHAEF) as the representative for German President Karl Dönitz.

The British statesman Leslie Hore-Belisha died of a cerebral haemorrhage while making a speech at the Hôtel de Ville in February 1957.

Reims has an oceanic climate (Köppen Cfb), influenced by its inland position. This renders that although the maritime influence moderates averages, it nevertheless is prone to hot and cold extremes in certain instances. Reims has a relatively gloomy climate due to the said maritime influence and the dominance of low-pressure systems for much of the year. In spite of this, the amount of precipitation is fairly limited.

Reims functions as a subprefecture of the department of Marne, in the administrative region of Grand Est. Although Reims is by far the largest commune in its department, Châlons-en-Champagne is the prefecture.

Rue de Vesle is the main commercial street (continued under other names), traversing the city from southwest to northeast through the Place Royale. 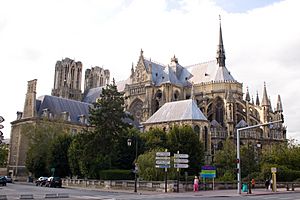 Reims cathedral and Palace of Tau

Reims Cathedral is an example of French Gothic architecture. 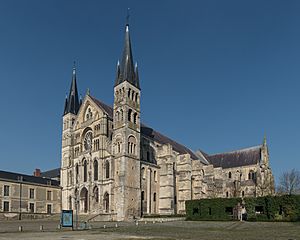 The Basilica of Saint-Remi, founded in the 11th century "over the chapel of St. Christophe where St. Remi was buried", is "the largest Romanesque church in northern France, though with later additions."

The Church of Saint-Jacques dates from the 13th to the 16th centuries. A few blocks from the cathedral, it stands as of 2009[update] in a neighbourhood of shopping and restaurants. The churches of Saint-Maurice (partly rebuilt in 1867), Saint-André, and Saint-Thomas (erected from 1847 to 1853, under the patronage of Cardinal Gousset, now buried within its walls) also draw tourists. 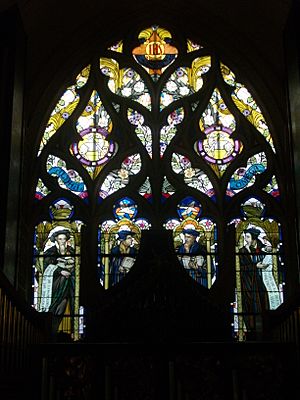 A stained glass window of the Protestant Church of Reims

The Protestant Church of Reims, built in 1921–1923 over designs by Charles Letrosne, is an example of flamboyant neo-Gothic architecture.

The Hôtel de Ville, erected in the 17th century and enlarged in the 19th, features a pediment with an equestrian statue of Louis XIII (reigned 1610 to 1643).

The Reims Manège and Circus

Narcisse Brunette was the architect of the city for nearly 50 years in the 19th century. He designed the Reims Manège and Circus, which "combines stone and brick in a fairly sober classical composition."

Examples of Art Deco in Reims include the Carnegie library.

The Foujita Chapel, built in 1965–1966 over designs and with frescos by Japanese–French artist Tsuguharu Foujita, has been listed as a monument historique since 1992.

The Palace of Tau contains such exhibits as statues formerly displayed by the cathedral, treasures of the cathedral from past centuries, and royal attire from coronations of French kings. 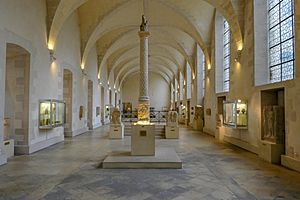 The Musée Saint-Remi, formerly the Abbey of Saint-Remi, contains tapestries from the 16th century donated by the archbishop Robert de Lenoncourt (uncle of the cardinal of the same name), marble capitals from the fourth century AD, furniture, jewellery, pottery, weapons and glasswork from the sixth to eighth centuries, medieval sculpture, the façade of the 13th-century musicians' House, remnants from an earlier abbey building, and also exhibits of Gallo-Roman arts and crafts and a room of pottery, jewellery and weapons from Gallic civilization, as well as an exhibit of items from the Palaeolithic to the Neolithic periods. Another section of the museum features a permanent military exhibition.

The Museum of Fine Arts is housed in the former Abbey of Saint-Denis. The former Collège des Jésuites has also become a museum. 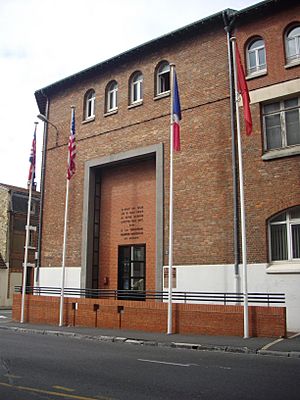 The Museum of the Surrender

The Museum of the Surrender is the building in which on 7 May 1945, General Eisenhower and the Allies received the unconditional surrender of the German Wehrmacht.

All content from Kiddle encyclopedia articles (including the article images and facts) can be freely used under Attribution-ShareAlike license, unless stated otherwise. Cite this article:
Reims Facts for Kids. Kiddle Encyclopedia.