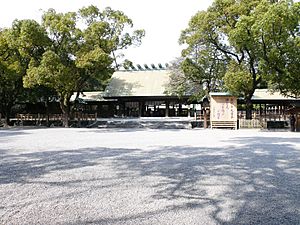 The Great Atsuta Shrine, which dates back to c. 100 CE and houses the holy sword Kusanagi, one of the imperial regalia of Japan

Nagoya is one of the largest cities in Japan, with over 2 and a quarter million people in 2010. It is in Aichi Prefecture. There are 16 wards in Nagoya.

The Tokugawa Art Museum, which houses some of the finest art treasures of Japan 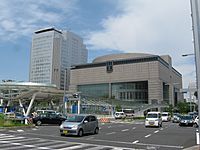 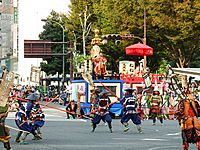 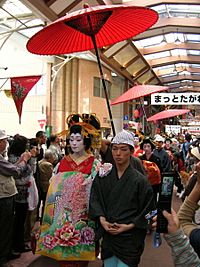 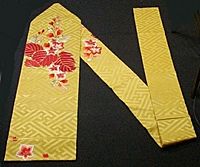 The Nagoya obi, the most popular type for kimono throughout Japan 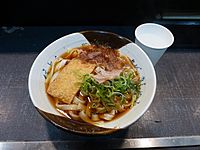 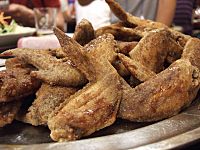 Nagoya was a major trading city and political seat of the Owari lords, the most important house of the Tokugawa clan. They encouraged trade and the arts under their patronage, especially Tokugawa Muneharu, the 7th lord, who took a keen interest in drama and plays and lived lavishly. Under his rule, actors and actresses began to visit Nagoya. Arts and culture was further supported by the city's wealthy merchants. Culture flourished after the feudal Edo period and the beginning of the Meiji era. During World War II many old buildings and artefacts were destroyed. The region's economic and financial power in the post-war years rekindled the artistic and cultural scene.

Nagoya Castle's collection is from the Owari Tokugawa era. The main tower is a museum that details the history of the castle and the city. The Honmaru Palace, destroyed in World War II, is slated for reconstruction by 2016 and will again be a prime example of the Shoin-zukuri architecture of the feudal era. Tokugawa Art Museum is a private museum belonging to the Owari Tokugawa, who lived in Nagoya castle for 16 generations. Among other things, it contains 10 designated national Treasures of Japan, including some of the oldest scrolls of The Tale of Genji. The Nagoya Noh Theatre houses various precious objects of Noh theatre. The Nagoya City Museum showcases the history of the town.

Yōki-sō is a villa and gardens located in Chikusa-ku, close to Nittai-ji. It was constructed in the Taishō era for Ito Jirozaemon Suketami XV, the first president of Matsuzakaya.

The art of porcelain and ceramics can be seen at the Noritake Garden. Toyota has two museums in the city, the Toyota Automobile Museum which shows vintage cars, and the Toyota Commemorative Museum of Industry and Technology, which showcases company history, including its start as a textile mill.

The Nagoya City Tram & Subway Museum has trams and subway cars, as well as the Nagoya City Science Museum. The SCMaglev and Railway Park opened in March 2011 with various trains from the Central Japan Railway Company.

Other art museums in Aichi prefecture are the Aichi Prefectural Ceramic Museum and the Toyota Municipal Museum of Art. Meiji Mura is an open-air museum with salvaged buildings from the Meiji, Taishō and Showa eras. Another museum in Nagoya is the Mandolin Melodies Museum.

Other museums in the city include the International Design Centre Nagoya, the Japan Spinning Top Museum and the Bank of Tokyo-Mitsubishi UFJ Money Museum.

The civic authorities promote tourism and have taken steps to safeguard architectural heritage by earmarking them as cultural assets. Apart from the castle, temples, shrines and museums in the city, a "Cultural Path" was instituted in the 1980s, located between the Tokugawa Art Museum and Nagoya Castle. This residential area has historic buildings such as the Nagoya City Archives, the Nagoya City Hall main building, the Aichi Prefectural Office main building, the Futaba Museum, the former residence of Sasuke Toyoda, the former residence of Tetsujiro Haruta and the Chikaramachi Catholic Church. Most buildings date from the Meiji and Taishō era and are protected.

Noh theatre and Kyōgen date back to the feudal times of the Owari Tokugawa. The Nagoya Noh Theater at Nagoya Castle continues that tradition and is a prominent feature in the cultural life of the city, with monthly performances.

Developed during the Edo period, one of Japan's kabuki grand stages is Misono-za, which also hosts various other Japanese entertainment such as concerts.

In 1992, the large, modern Aichi Arts Center was opened in Sakae. It is the main venue for performing arts, featuring a main hall that can be used for opera and theatre and a concert hall. The Nagoya Philharmonic Orchestra performs there, as well as many visiting guest orchestras.

Apart from the main national festivals and holidays, other festivals in Nagoya are unique to the city/region.

a geta, side view

The industry of Japanese handicrafts in the city is centuries old.

The city and the region are known for its unique local. Dishes include:

Nagoya, especially Nagoya Castle, has been featured in three Godzilla movies: King Kong vs. Godzilla, Mothra vs. Godzilla, and Godzilla vs. Mothra. The city is also featured in Gamera vs. Gyaos and is the main setting of 2003 film Gozu. 1995 film The Hunted starred Christopher Lambert and the 1992 film Mr. Baseball starred Tom Selleck.

The city was the setting for the 2007 movie Ashita e no yuigon (translated as Best Wishes for Tomorrow), in which a Japanese war criminal sets out to take responsibility for the execution of U.S. airmen.

The anime The Wind Rises by Hayao Miyazaki, released in 2013, is a highly fictionalized biography of the Mitsubishi A6M Zero's chief engineer Jiro Horikoshi and takes mostly place in Nagoya of the 1920s and 1930s.

All content from Kiddle encyclopedia articles (including the article images and facts) can be freely used under Attribution-ShareAlike license, unless stated otherwise. Cite this article:
Nagoya Facts for Kids. Kiddle Encyclopedia.