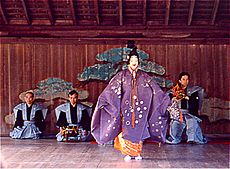 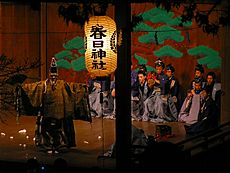 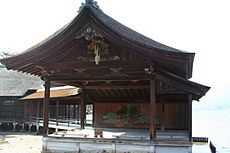 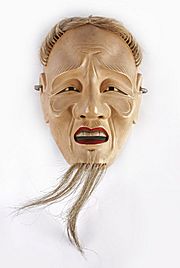 A Noh mask made to represent an old man (called a "Ko-jo" in Japanese.

Noh or No (Japanese:能 Nō) is a major form of classical Japanese musical drama. It started in the 14th century and continues today. Noh is made up of mai (dances), hayashi (music) and utai (words usually in songs). The performers use masks and dance slowly. Zeami and his father Kan'ami brought Noh to its present-day form during the Muromachi period.

Theater pieces of Noh are classified into 5 groups.

All Noh players are men. They have been taught their skills by their fathers. When a woman or girl appears in the drama, a male actor plays her role with a woman mask.

There are three types of Noh players: shite, waki and kyogen. Shite plays the hero or the heroine. He talks sings and dances. Waki (meaning "Side") and plays the sidekick of Shite. The Waki usually plays the role of a traveler role. He introduces us to the world in the drama. Kyogen appears in the middle of the drama if it has two parts, and plays the role of the local citizen. He talks to Waki and makes him notice something new or realize what has happened.

Hayashi means musical instrumentals. Two kinds of drum (Tuzumi, Taiko) and a flute (Fue) are used in the theater.

All content from Kiddle encyclopedia articles (including the article images and facts) can be freely used under Attribution-ShareAlike license, unless stated otherwise. Cite this article:
Noh Facts for Kids. Kiddle Encyclopedia.