In ancient times, the Japanese New Year followed the same lunisolar calendar as the Chinese/Korean/Vietnamese New Year (at the beginning of spring). Since 1873, Japan has followed the same months as the Gregorian calendar, so January 1st is the official New Year's Day for Japan. It is one of the most important festivals of the whole year. The Japanese New Year is a traditional festival which has been celebrated for centuries and has its own unique customs. 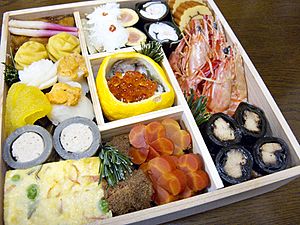 Many of the traditional dishes are sweet or sour because they kept better; when they were invented, most stores used to close for about a week and the refrigerator had not yet been invented. There are many variations of osechi foods. Today, sashimi and sushi are often eaten. To let the overworked stomach rest, Nanakusa gayu (seven vegetable rice soup) is prepared on the 7th or 15th day. The special food prepared for New Year's Day is a joy for many Japanese. 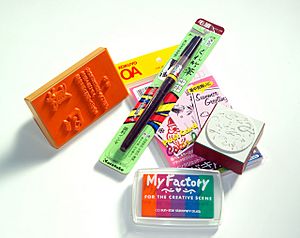 The Japanese have a custom of sending New Year's Day postcards to their friends and relatives. It is similar to the custom of sending Christmas cards. Instead of sending Christmas cards, Japanese people send these postcards so that they arrive on the 1st of January. The post office guarantees to deliver the greeting postcards on the first of January if they are marked with the words nengajo and are posted within a time limit, from mid-December to near the end of the month. In order to send these cards on time, the post office usually hires students part-time to help deliver the letters. The end of December and the beginning of January are the busiest times for the Japanese post office.

It is customary not to send postcards when one has had a death in the family during the year. In this case, a simple postcard is sent instead to inform friends and relatives that they should not send joyful New Year's cards, in order to show respect for the dead in Japan.

Most of the postcards have the Chinese zodiac sign of the new year as their design. This has a cycle of 12 years. Each year is represented by an animal. The animals are, in order: mouse, cow, tiger, rabbit, dragon, snake, horse, sheep, monkey, rooster, dog, and boar. The year 2018 is the year of the dog. Even with the rise in popularity of email, the nengajo remains very popular in Japan. 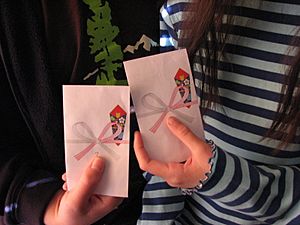 Every New Year's, kids in Japan get cash gifts in pretty envelopes

On New Year's Day, Japanese people have a custom of giving pocket money to children. This is known as otoshidama, which is a custom from China. It is handed out in small decorated envelopes called 'pochibukuro', descendants of the Chinese red packet. In the Edo period, large stores and wealthy families gave out a small bag of mochi and a Mandarin orange to spread happiness all around. The amount of money given depends on the age of the child but is usually the same if there is more than one child so that no one feels slighted.

Another custom of the Japanese is making rice cakes. Boiled mochigome (sticky rice) is put in to a wooden shallow bucket-like container and patted with water by one person while another person hits it with a large wooden hammer. By mashing the rice, it gets sticky and forms a sticky white dumpling. This is made before New Year's Day and eaten during the beginning of January.

All content from Kiddle encyclopedia articles (including the article images and facts) can be freely used under Attribution-ShareAlike license, unless stated otherwise. Cite this article:
Japanese New Year Facts for Kids. Kiddle Encyclopedia.