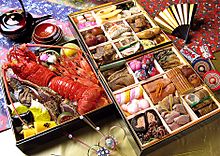 Osechi is Japanese food made to celebrate the coming of the New Year, called Shogatsu. It is one of the most important annual events in Japan. Osechi food is packed in colorful lacquer boxes called jubako. Each dish and ingredient in osechi has a meaning, such as good health, fertility, good harvest, happiness, long life, and so on. The kind of osechi foods eaten in Japanese homes varies from area to area. It is a Japanese tradition to eat osechi dishes during the New Year's holidays which go from January 1 to January 3.

One year there was not much food. People did not have enough rice to cook in their rice cooker. Emperor Nintoku knew about this and it worried him a lot. He said that he would lower the taxes in years when people did not have enough rice for New Years Day. After that the taxes were lowered but the House of Emperor Nintoku became poor. Japanese people celebrated this custom on New Years Day. Osechi-ryori is a dish that is cooked before New Year's Eve to eat on New Years Day.

On New Years Day, the God of the Year, named Toshigami comes to the world and the world starts a new year. The god came through a special gate, a Kadomatsu, into our world. He is god of agriculture. In Japan when agriculture was the main activity of life, people welcomed Toshigami and hoped for a rich harvest. A special decoration, a shimekazari was put up to welcome the god. Another decoration, a wakazari, was put up to make sure that nothing would go wrong during the next year. Osechi is a meal to give to Toshigami. In Japan people gave the first part of the crop to god. The rest of the celebration was a feast, called naorai.

The beginning of osechi starts in the Yayoi period. This went from 1000 BC to 300 AD. People at that time were starting to grow rice. As part of a harvest festival, called Sekku, people made food gifts to please the gods. Sekku foods are eaten to thank the gods for the blessing of nature, a good harvest and big catch. This is the beginning of osechi. This idea came from China.

In the Heian period, from 710 to 1185, this event became more common in Japan as the influence of China became more important. There were five seasonal festival days or sekku, January 7 (Jinjitsu or Nanakusa no sekku), March 3 (Joshi or Momo no sekku), 5 May (Tango or Shobu no sekku), 7 July (Tanabata no sekku) and 9 September (Choyo or Kiku no sekku). An offering table was set up for the gods. The foods offered to the gods were dry foods, not processed for people to eat. Modern osechi comes from the Edo period (1603—1867). These days many Japanese people buy their osechi in shops instead of making it at home.

There are many different osechi foods, and each has a special meaning. The shape, the color, and the name of each food has a meaning which might bring good luck, happiness or long life. One type of osechi is made from black soybean and herring roe. Black is a color which brings youth and long life. The name of the black soybean means that people can live a long life without sickness. Herring roe symbolizes the prosperity of descendants, because there is a lot of roe in each piece.

Chestnuts are rolled into an omelet mixed with fish paste and steamed fish paste Chestnut means a mass of gold and it represents the wish that people get ahead in business and become rich person. A rolled mixed with fish paste mean the culture and diligence because it is a symbol or a scroll from the meaning of dressing up. And red steamed fish paste means removing evil and white means a pure mind. Kelp is a symbol of congratulation and longevity and is auspicious food endowed happiness.

All content from Kiddle encyclopedia articles (including the article images and facts) can be freely used under Attribution-ShareAlike license, unless stated otherwise. Cite this article:
Osechi Facts for Kids. Kiddle Encyclopedia.