Bitter orange, Seville orange, sour orange, bigarade orange, or marmalade orange refers to a citrus tree (Citrus × aurantium) and its fruit. It is native to southeast Asia, and has been spread by humans to many parts of the world. Wild trees are found near small streams in generally secluded and wooded parts of Florida and The Bahamas after it was introduced to the area from Spain where it had been introduced and cultivated heavily beginning in the 10th century by the Moors.

It is a hybrid between Citrus maxima (pomelo) and Citrus reticulata (mandarin). Many varieties of bitter orange are used for their essential oil, and are found in perfume, used as a flavoring or as a solvent. The Seville orange variety is used in the production of marmalade.

Bitter orange is also employed in herbal medicine as a stimulant and appetite suppressant, due to its active ingredient, synephrine. Bitter orange supplements have been linked to a number of serious side effects.

Seville orange (or bigarade) is a widely known, particularly tart orange which is now grown throughout the Mediterranean region. It has a thick, dimpled skin, and is prized for making marmalade, being higher in pectin than the sweet orange, and therefore giving a better set and a higher yield. It is also used in compotes and for orange-flavored liqueurs. Once a year, oranges of this variety are collected from trees in Seville and shipped to Britain to be used in marmalade. However, the fruit is rarely consumed locally in Andalusia. 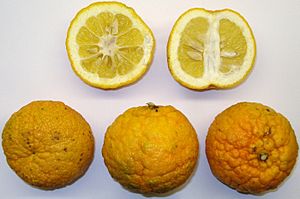 The bitter orange, whole and sectioned. 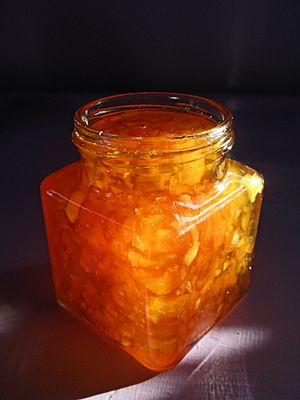 English marmalade is traditionally homemade in the winter months

The Seville orange—when preserved in Caribbean sugar—is the principal ingredient in traditional British marmalade, reflecting the historic Atlantic trading relationship with Portugal and Spain: the earliest recipe for 'marmelat of oranges' dating from 1677. The peel can be used in the production of bitters. The unripe fruit, called narthangai, is commonly used in Southern Indian cuisine, especially in Tamil cuisine. It is pickled by cutting it into spirals and stuffing it with salt. The pickle is usually consumed with yoghurt rice called thayir sadam. The fresh fruit is also used frequently in pachadis.

The Belgian Witbier (white beer) is made from wheat beer spiced with the peel of the bitter orange. The Finnish and Swedish use bitter orange peel in gingerbread (pepparkakor), some Christmas bread and in mämmi. It is also used in the Nordic mulled wine glögg. In Greece and Cyprus, the nerántzi or kitrómilon, respectively, is one of the most prized fruits used for spoon sweets, and the C. aurantium tree (nerantziá or kitromiliá) is a popular ornamental tree. In Albania as well, "nerënxa" or "portokalli i hidhur" is used commonly in spoon sweets. The blossoms are collected fresh to make a prized sweet-smelling aromatic jam ("Bitter orange blossom jam" Morabba Bahar-Narendj), or added to brewing tea.

In Turkey, juice of the ripe fruits can be used as salad dressing, especially in Çukurova region. However, in Iraqi cuisine, a bitter orange or "raranj" in Iraqi is used to compliment dishes like Charred Fish "samak/simach maskouf", tomato stew "morgat tamata", "Qeema", a dish that has the same ingredients as an Iraqi tomato stew, with the addition of minced meat, boiled chikpeas "lablabi", salads as a dressing and pretty much on every single dish you desire to accompany bitter orange with. Iraqis also consume it as a citrus fruit or juice it to make bitter orange juice "'aseer raranj". Throughout Iran (commonly known as narenj), the juice is popularly used as a salad dressing, souring agent in stews and pickles or as a marinade.

In the Americas, the juice from the ripe fruit is used as a marinade for meat in Nicaraguan, Cuban, Dominican and Haitian cooking, as it is in Peruvian ceviche. In Yucatán (Mexico), it is a main ingredient of the cochinita pibil. 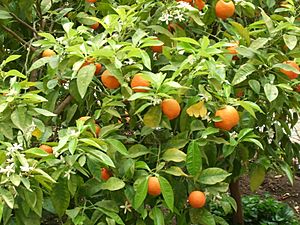 The extract of bitter orange (and bitter orange peel) has been marketed as dietary supplement purported to act as a weight-loss aid and appetite suppressant. Bitter orange contains the tyramine metabolites N-methyltyramine, octopamine and synephrine, substances similar to epinephrine, which act on the α1 adrenergic receptor to constrict blood vessels and increase blood pressure and heart rate. Several low-quality clinical trials have had results of p-Synephrine (alone or in combination with caffeine or some other substances) increasing weight loss slightly.

All content from Kiddle encyclopedia articles (including the article images and facts) can be freely used under Attribution-ShareAlike license, unless stated otherwise. Cite this article:
Bitter orange Facts for Kids. Kiddle Encyclopedia.