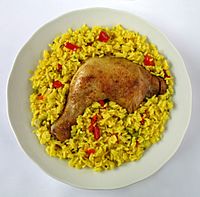 Cuban cuisine is a blend of African, Spanish, and other Caribbean cuisines. Some Cuban recipes share spices and techniques with Spanish and African cooking, with some Caribbean influence in spice and flavor. This results in a blend of the several different cultural influences. A small but noteworthy Chinese influence can also be accounted for, mainly in the Havana area. There is also some Italian influence. During colonial times, Cuba was an important port for trade, and many Spaniards who lived there brought their culinary traditions with them.

As a result of the colonization of Cuba by Spain, one of the main influences on the cuisine is from Spain. Other culinary influences include Africa, from the Africans who were brought to Cuba as slaves, and French, from the French colonists who came to Cuba from Haiti. Another factor is that Cuba is an island, making seafood something that greatly influences Cuban cuisine. Another contributing factor to Cuban cuisine is that Cuba is in a tropical climate, which produces fruits and root vegetables that are used in Cuban dishes and meals. 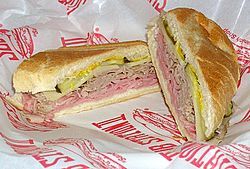 A Cuban sandwich (sometimes called a mixto, especially in Cuba) is a popular lunch item that grew out of the once-open flow of cigar workers between Cuba and Florida (specifically Key West and the Ybor City neighborhood of Tampa) in the late 19th century and has since spread to other Cuban American communities.

The sandwich is built on a base of lightly buttered Cuban bread and contains sliced roast pork, thinly sliced Serrano ham, Swiss cheese, dill pickles, and yellow mustard. In Tampa, Genoa salami is traditionally layered in with the other meats, probably due to influence of Italian immigrants who lived side-by-side with Cubans and Spaniards in Ybor City. Tomatoes and lettuce are available additions in many restaurants, but these are considered by traditionalists as an unacceptable Americanization of the sandwich.

After assembly, the Cuban sandwich may be pressed in a grooveless panini-type grill called a plancha, which both heats and compresses the contents. 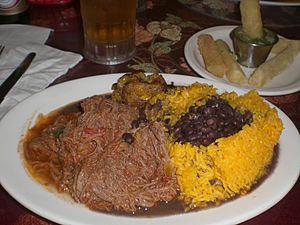 All content from Kiddle encyclopedia articles (including the article images and facts) can be freely used under Attribution-ShareAlike license, unless stated otherwise. Cite this article:
Cuban cuisine Facts for Kids. Kiddle Encyclopedia.