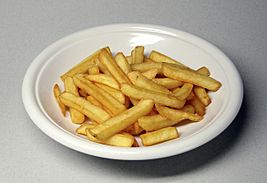 A bowl of French fries

French fries (North American English), chips (British English), fries, finger chips (Indian English), or French-fried potatoes are batonnet or allumette-cut deep-fried potatoes. In the United States and most of Canada, the term fries refers to all dishes of fried elongated pieces of potatoes, while in the United Kingdom, Australia, South Africa (rarely), Ireland and New Zealand, thinly cut fried potatoes are sometimes called shoestring fries or skinny fries to distinguish them from the thicker-cut chips.

French fries are served hot, either soft or crispy, and are generally eaten as part of lunch or dinner or by themselves as a snack, and they commonly appear on the menus of diners, fast food restaurants, pubs, and bars. Fries in America are generally salted and are almost always served with ketchup, but in many countries they have other condiments or toppings, like vinegar, mayonnaise, or other local specialties. Fries can be topped more heavily, as in the dishes of poutine and chili cheese fries. French fries can be made from sweet potatoes instead of potatoes. A baked variant of the French fry ("oven chips") uses less or even no oil. 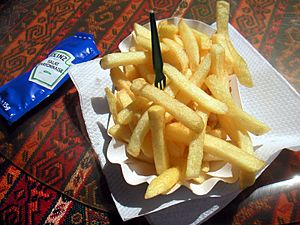 Pommes frites with a mayonnaise packet

French fries are prepared by first peeling and cutting the potato into even strips. These are then wiped off or soaked in cold water to remove the surface starch, and thoroughly dried. They may then be fried in one or two stages. Chefs generally agree that the two-bath technique produces better results.

In the two-stage or two-bath method, the first bath, sometimes called blanching, is in hot fat (around 160 °C / 320 °F) to cook them through. This may be done in advance. Then they are more briefly fried in very hot fat (190 °C / 375 °F) to crisp the exterior. They are then placed in a colander or on a cloth to drain, salted, and served. The exact times of the two baths depend on the size of the potatoes. For example, for 2–3mm strips, the first bath takes about 3 minutes, and the second bath takes only seconds.

Most French fries are produced from frozen potatoes which have been blanched or at least air-dried industrially. The usual fat for making French fries is vegetable oil. In the past, beef suet was recommended as superior, with vegetable shortening as an alternative. In fact, McDonald's used a mixture of 93% beef tallow and 7% cottonseed oil until 1990, when they switched to vegetable oil with beef flavoring.

All content from Kiddle encyclopedia articles (including the article images and facts) can be freely used under Attribution-ShareAlike license, unless stated otherwise. Cite this article:
French fries Facts for Kids. Kiddle Encyclopedia.