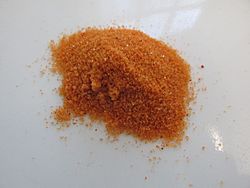 Seasoned salt is a blend of table salt, herbs, spices, other flavourings, and sometimes monosodium glutamate (MSG). It is sold in supermarkets and is commonly used in fish and chip shops and other take-away food shops. Seasoned salt is often the standard seasoning on foods such as chicken, French fries, deep-fried seafood, and potatoes.

The seasoned salt industry in the United States sells US$100 million in seasoned salt annually. According to the US Federal Trade Commission, two brands make up 80% of that market. 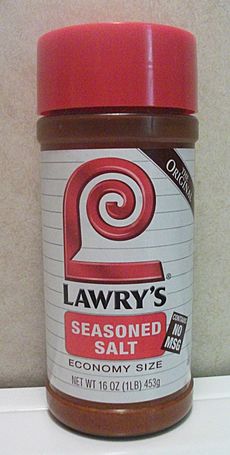 Lawry's, the most common brand of seasoned salt in the US

Lawry's, the oldest commonly used "seasoned salt" in the US, was originally developed for seasoning steaks in the 1930s.

Morton Season-All is the #2 seasoned salt in the US by market share.

In Louisiana and the surrounding states, many companies make Cajun/Creole seasonings. It is a spicy blend of onion powder, garlic powder, paprika, oregano or thyme, salt, pepper, and chili powder. Brands include Tony Chachere's, Zatarain's and Paul Prudhomme.

Invented in the 1970s in the English city of Hull and claimed to have been inspired by American seasonings, "chip spice" was introduced into the United Kingdom in the 1970s in Kingston upon Hull by the Spice Blender company; the recipe was based on American spiced salts containing paprika.

Chicken salt was originally developed in the 1970s by Peter Brinkworth in Gawler, South Australia to season chicken for rotisseries. It is now commonly used on hot chips (termed "french fries" in the United States).

The first recipe for chicken salt consisted of onion powder, garlic powder, celery salt, paprika, chicken bouillon and monosodium glutamate with some curry powder. There are versions of chicken salt that use chicken flavoring as well as vegan versions.

All content from Kiddle encyclopedia articles (including the article images and facts) can be freely used under Attribution-ShareAlike license, unless stated otherwise. Cite this article:
Seasoned salt Facts for Kids. Kiddle Encyclopedia.