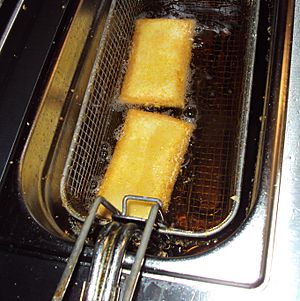 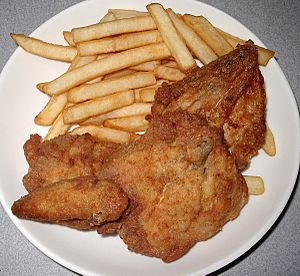 Deep frying is a way of cooking food by putting it in hot oil or fat. Deep frying cooks food very quickly. 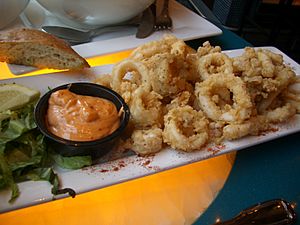 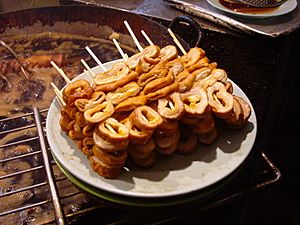 If done well, deep-frying does not make food too greasy, because the moisture in the food repels the oil. The hot oil heats the water in the food, steaming it from the inside out. The water vapor pushes the bubbles toward the surface of the oil. As long as the oil is hot enough and the food is not in the oil for too long, oil will only enter the surface of the food. However, if the food is cooked in the oil for too long, much of the water will be lost and the oil will begin to penetrate the food. The correct frying temperature depends on the thickness and type of food, but is usually between 175 and 190 °C (345–375 °F).

Some fried foods are given a coating of batter or breading prior to frying. This makes the outside of the food crispy and browned, while the inside becomes tender, moist, and steamed. Some foods – such as potatoes or whole, skin-on poultry – have a natural coating and do not require breading or battering. 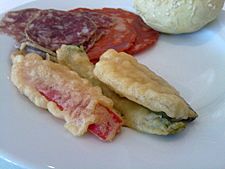 The English expression deep-fried is attested from the early 20th century; "fried chicken" is from 1832.

Frying food in olive oil is attested in Classical Greece from about the 5th century BCE. The late Roman cookbook of Apicius (c. 400), appears to list the ancient Romans' first use of deep frying to prepare Pullum Frontonianum, a chicken dish. The practice of deep frying spread to other parts of Europe and Arabia in the following centuries. Deep-fried foods such as funnel cakes arrived in northern Europe by the 13th century, and deep-fried fish recipes have been found in cookbooks in Spain and Portugal at around the same time}}</ref> Falafel arrived in the Middle East from population migrations from Egypt as soon as the 14th century. The deep frying of food in Japan was likely introduced by Portuguese the 16th century. Evidence of potato frying can be found as early as the late 17th century in Europe.

Deep frying is done with a deep fryer, a pan such as a wok or chip pan, a Dutch oven, or a cast-iron pot. Additional tools include fry baskets, which are used to contain foods in a deep fryer and to strain foods when removed from the oil, and cooking thermometers, used to gauge oil temperature. Tongs, slotted spoons, wooden spoons, and sieves may be used to remove or separate foods from the hot oil.

In the United States, the Chicago Tribune notes that "you can deep fry almost anything". The American South has been noted as a modern center of innovation in the area of deep-fried food. According to the owner of a deep frying restaurant in the South, "If something is edible, you can bet that someone south of the Mason-Dixon line has tried to cook it in oil".

In Northern Africa, deep-fried dishes are a part of the cuisine. A common food in this region is the deep-fried fritter, also referred to as "sponges". In areas of Southern Africa, street foods include deep-fried potato and cassava chips. Deep-fried foods in the country of South Africa include fish and chips, vetkoek and koeksisters, among others. 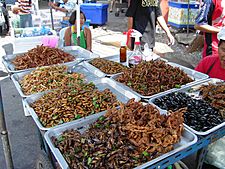 Japanese tempura is a popular deep-fried food that generally consists of battered and fried seafood and vegetables. Japanese deep-fried dishes, or Agemono, include other styles besides tempura, such as Karaage, Korokke, Kushikatsu, and Tonkatsu. In areas of south-east Asia such as Thailand, insects are commonly deep-fried for human consumption. Western-style fast food items such as donuts, deep-fried chicken, and deep-fried potatoes are also becoming popular in Asia.

Deep-fried sticks of dough, known as youtiao in Chinese, are eaten in many East and Southeast Asian cuisines.

In Hong Kong, deep-fried intestine of pigs is a popular food. In South Asia, popular deep fried snacks are samosa and pakora. 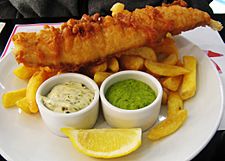 Many countries in Europe use pure or hydrogenated rapeseed oil for deep-frying. The deep-fried Mars bar originated in Scotland, with The Carron Fish Bar in Stonehaven claiming to have invented it in the early 1990s. Fish and chips is a very popular deep-fried dish in England since it originated in London in the 19th century and became popular among the working class. Its popularity continues with 229 million portions of fish and chips being sold annually in England.

There is an annual trade fair devoted to deep-fried foods called the International Symposium on Deep-Fat Frying which features discussions on deep fat frying as well as exhibitions by companies involved with the process.

In the United States, soybean oil is often used for deep-frying. Beignets, originally a French dish, are a popular deep-fried pastry in the U.S. city of New Orleans. Deep-fried food has been a core part of the culture of the American South with many restaurants solely serving deep-fried foods. The owner of one such restaurant has said that the deep-fried food, "in the South it's a way of life". Fast food is one of the most common ways to consume deep-fried food in North America.

Novelty deep-fried foods are popular today in American fairs, especially those in the American South. Hundreds of items are served at these fairs. Some of them include deep-fried beer, butter, and bubblegum. Additionally, deep frying can be used as a form of artwork by frying non-edible objects, such as electronics. Artists such as Henry Hargreaves have deep-fried replicas of electronic items such as iPads, Game Boys, and laptops.

Deep-fried food contests are frequently held at fairs such as the Texas State Fair, where they hold an annual contest for the most creative deep-fried food. Notable past winners have included fried Coke and deep-fried butter, both invented by Abel Gonzales. Since 2013, an American reality competition show called deep-fried Masters, produced by Discovery Networks, holds deep frying competitions at several state fairs across the country.

Milk bars in Australia may purvey several types of deep-fried foods, along with other food types. 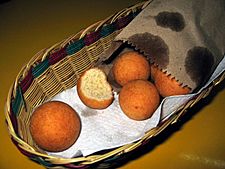 The buñuelo, a fried dough ball popular in Central America and Greece, is a popular deep-fried snack and street food in South America. Picarone, a Peruvian dessert originated in the colonial period, are deep-fried cakes made with pumpkin and sweet potatoes, popular in Peru and Chile, especially during harvest festivals.

Overheating or over-using the frying oil leads to formation of rancid-tasting products of oxidation, polymerization, and other deleterious, unintended or even toxic compounds such as acrylamide (from starchy foods). Recent research suggests fat deterioration may be worse when fat or oil is fried with food than when fat or oil is tested on its own in a laboratory. Deep-frying under vacuum helps to significantly reduce acrylamide formation, but this process is not widely used in the food industry due to the high investment cost involved.

Some useful tests and indicators of excessive oil deterioration are the following:

Instruments that indicate total polar compounds, currently the best single gauge of how deep-fried an object is, are available with sufficient accuracy for restaurant and industry use. 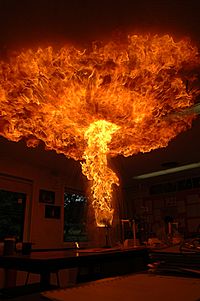 When deep frying, fires can be very severe, with chip pan fires being the leading cause of house fires in the United Kingdom.

Cooking oil is flammable, and fires may be caused by it igniting at too high a temperature. Further, attempts to extinguish an oil fire with water cause an extremely dangerous condition, a boilover, as they cause the water to flash into steam due to the high heat of the oil, in turn sending the burning oil in all directions and thus aggravating the fire. This is the leading cause of house fires in the United Kingdom. Instead, oil fires must be extinguished with a non-water fire extinguisher or by smothering. Other means of extinguishing an oil fire include application of dry powder (e.g., baking soda, salt) or fire fighting foam. Most commercial deep fryers are equipped with automatic fire suppression systems using foam.

Spilled hot cooking oil can also cause severe third degree burns, In the worst-case scenario, severe burns can be fatal. The higher temperatures and tendency of oil to stick to the skin make spilled hot cooking oil far more dangerous than spilled hot water. Children can accidentally place their hands on top of the stove, playing with the materials while being cooked, or accidentally pull the pot down, which can cause significant injury. The utmost care should be used when deep frying when children are present, to protect their safety at all times. 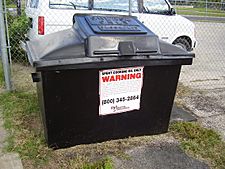 A bin for spent cooking oil in Austin, Texas, managed by a recycling company

Deep frying produces large amounts of waste oil, which must be disposed of properly. Waste oil can overflow sewage systems, bind to the walls of sewage pipes, and interfere with sewage treatment. Waste oil from deep frying is increasingly being recycled and refined into biodiesel. Potatoes that are stored in artificially humidified warehouses contain more water, which makes the time required to deep fry them into chips longer. This increases the carbon dioxide footprint of commercially producing chips because more energy is required for frying over a longer time. According to one source, an average home appliance deep fryer draws 2,000 watts.

The process of deep frying food is generally detrimental to its nutritional value. The oils that foods absorb in their batter typically contain large amounts of fats, especially saturated fats and trans fats. Consumption of large amounts of saturated and trans fats has been linked to a higher risk for some cancers including prostate cancer. Eating deep-fried foods has also been linked to higher cholesterol levels, obesity, heart attacks, and diabetes. Deep-fried foods cooked at certain temperatures can also contain acrylamide, a possible carcinogen. Additionally, fat degradation processes during deep frying results in the loss of nutritional value in deep-fried foods. Reused deep fried cooking oil may in addition cause blood pressure elevation and vascular hypertrophy.

All content from Kiddle encyclopedia articles (including the article images and facts) can be freely used under Attribution-ShareAlike license, unless stated otherwise. Cite this article:
Deep frying Facts for Kids. Kiddle Encyclopedia.