Beignet ( BEN-yay, also bayn-YAY-,_-BEN-yay, lit. bump) is a type of fritter, or deep-fried pastry, typically made from pâte à choux, but may also be made from other types of dough, including yeast dough.

The term beignet can be applied to two varieties, depending on the type of pastry. The French-style beignet in the United States has the specific meaning of deep-fried choux pastry.

Beignets can also be made with yeast pastry, which might be called boules de Berlin in French, referring to Berliner doughnuts, which lack the typical doughnut hole, filled with fruit or jam.

In Corsica, beignets made with chestnut flour (beignets de farine de châtaigne) are known as fritelli.

In Canadian French, doughnuts are referred to alternately as beigne or beignet. 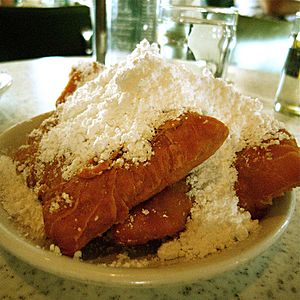 Beignets from the Café du Monde in New Orleans

Beignets are commonly known in New Orleans as a breakfast served with powdered sugar on top. They are traditionally prepared right before consumption to be eaten fresh and hot. Variations of fried dough can be found across cuisines internationally; however, the origin of the term beignet is specifically French. In the United States, beignets have been popular within New Orleans Creole cuisine and may also be served as a dessert. They were brought to New Orleans in the 18th century by French colonists, from "the old mother country", also brought by Acadians, and became a large part of home-style Creole cooking. Variations often including banana or plantain – popular fruits in the port city – or berries.

All content from Kiddle encyclopedia articles (including the article images and facts) can be freely used under Attribution-ShareAlike license, unless stated otherwise. Cite this article:
Beignet Facts for Kids. Kiddle Encyclopedia.