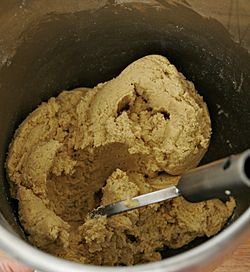 Dough is a paste made out of flour by mixing it with a small amount of water. Dough can be used to make bread, pastries, cookies, muffins, and other foods.

In many parts of central India, people use the quick method of making an instant roasted dough ball or baati. Flat, unleavened breads known as roti, lavash, yufka, matzo, and tortilla are used in many parts of the world today.

Leavened dough, made from dry, ground grains mixed with water and yeast, is used all over the world. It includes all kinds of breads made from wheat, maize, rice and other grains or similar crops used today in the world.

Fried dough foods are common in many cultures. In the United States, "elephant ears" is a common name for fried dough.

In slang, dough is money. 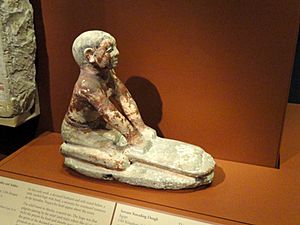 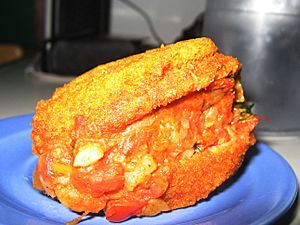 Acarajé is a fried dough food

Doughs vary widely depending on ingredients, the kind of product being produced, the type of leavening agent (particularly whether the dough is based on yeast or not), how the dough is mixed (whether quickly mixed or kneaded and left to rise), and cooking or baking technique. There is no formal definition of what makes dough, though most doughs have viscoelastic properties.

Leavened or fermented doughs (generally made from grain cereals or legumes that are ground to produce flour, mixed with water and yeast) are used all over the world to make various breads. Salt, oils or fats, sugars or honey and sometimes milk or eggs are also common ingredients in bread dough. Commercial bread doughs may also include dough conditioners, a class of ingredients that aid in dough consistency and final product.

Pasta and noodles are generally based on unleavened doughs that are worked until they are dry and smooth, and then shaped into their final form. The finished pasta may be cooked immediately or dried before cooking.

Doughs with higher fat content have a lesser water content, develop less gluten and are therefore generally less elastic than bread doughs; these doughs are often called "short" by bakers. This category includes many cookie and pie crust doughs, such as shortcrust pastry.

In many parts of central India, people use the quick method of making an instant roasted dough ball or baati. In countries in the Sahel region of Africa, dough balls called aiysh or biya are made from sorghum or millet, and are ground and boiled.

Quick breads use leavening agents other than yeast (such as baking powder or baking soda), and include most cookies, cakes, biscuits, and more; these may be based on a batter or a dough.

Techniques used in dough production depend on the type of dough and final product.

For yeast-based and sponge (such as sourdough) breads, a common production technique is the dough is mixed, kneaded, and then left to rise. Many bread doughs call for a second stage, where the dough is kneaded again, shaped into the final form, and left to rise a final time (or proofed) before baking. Kneading is the process of working a dough to produce a smooth, elastic dough by developing gluten. This process is both temperature and time-dependent; temperatures that are either too hot or too cold will cause the yeast to not develop, and rising times that are either too short or too long will affect the final product.

Pasta is typically made from a dry dough that is kneaded and shaped, either through extrusion, rolling out in a pasta machine, or stretched or shaped by hand (as for gnocchi or dumplings). Pasta may be cooked directly after production (so-called "fresh pasta") or dried, which renders it shelf-stable.

Doughs for biscuits and many flatbreads which are not leavened with yeast are typically mixed but not kneaded or left to rise; these doughs are shaped and cooked directly after mixing.

While breads and other products made from doughs are often baked, some types of dough-based foods are cooked over direct heat, such as tortillas, which are cooked directly on a griddle. Fried dough foods are also common in many cultures.

Pancakes, waffles, some kinds of bar cookies such as brownies, and many cakes and quick breads (including muffins and the like) are often made with a semi-liquid batter of flour and liquid that is poured into the final shape, rather than a solid dough. Unlike bread dough, these batters are not stabilized by the formation of a gluten network.

All content from Kiddle encyclopedia articles (including the article images and facts) can be freely used under Attribution-ShareAlike license, unless stated otherwise. Cite this article:
Dough Facts for Kids. Kiddle Encyclopedia.