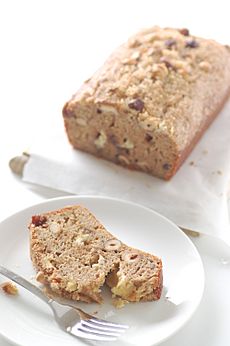 Banana bread is a type of quick bread

Quick bread is any bread leavened with leavening agents other than yeast or eggs. An advantage of quick breads is their ability to be prepared quickly and reliably, without requiring the time-consuming skilled labor and the climate control needed for traditional yeast breads.

"Quick bread" most probably originated in the United States at the end of the eighteenth century. Before the creation of quick bread, baked goods were leavened either with yeast or by mixing dough with eggs. "Fast bread" is an alternate name.

The discovery or rediscovery of chemical leavening agents and their widespread military, commercial, and home use in the United States dates back to 1846 with the introduction of commercial baking soda in New York, by Church and Dwight of "Arm & Hammer" fame. This development was extended in 1856 by the introduction of commercial baking powder in Massachusetts, although perhaps the best known form of baking powder is "Calumet", first introduced in Hammond, Indiana and West Hammond, Illinois (later Calumet City, Illinois) in 1889. Both forms of food-grade chemical leaveners are still being produced under their original names, although not within the same corporate structure.

During the American Civil War (1861–1865), the demand for portable and quickly-made food was high, while skilled labor for traditional breadmaking was scarce. This encouraged the adoption of bread which was rapidly made and leavened with baking soda, instead of yeast. The shortage of chemical leaveners in the American South during the Civil War contributed to a food crisis there.

As the Industrial Revolution accelerated, the marketing of mass-produced prepackaged foods was eased by the use of chemical leaveners, which could produce consistent products regardless of variations in source ingredients, time of year, geographical location, weather conditions, and many other factors that could cause problems with environmentally sensitive, temperamental yeast formulations. These factors were traded off against the loss of traditional yeast flavor, nutrition, and texture.

During the chemical leavening process, agents (one or more food-grade chemicals—usually a weak acid and a weak base) are added into the dough during mixing. These agents undergo a chemical reaction to produce carbon dioxide, which increases the baked good's volume and produces a porous structure and lighter texture. Yeast breads often take hours to rise, and the resulting baked good's texture can vary greatly based on external factors such as temperature and humidity. By contrast, breads made with chemical leavening agents are relatively uniform, reliable, and quick. Usually, the resulting baked good is softer and lighter than a traditional yeast bread.

Chemical leavening agents include a weak base, such as baking soda (sodium bicarbonate) plus a weak acid, such as cream of tartar, lemon juice, or cultured buttermilk, to create an acid–base reaction that releases carbon dioxide. (Quick bread leavened specifically with baking soda is often called "soda bread".) Baking powder contains both an acid and a base in dry powdered form, and simply needs a liquid medium in which to react. Other alternative leavening agents are egg whites mechanically beaten to form stiff peaks, as in the case of many waffle recipes, or steam, in the case of cream puffs. Nevertheless, in a commercial process, designated chemical leavening acids and bases are used to make gas production consistent and controlled. Examples of acid—base combinations include:

Almost all quick breads have the same basic ingredients: flour, leavening, eggs, fat (butter, margarine, shortening, or oil), and liquid such as milk. Ingredients beyond these basic constituents are added for variations in flavor and texture. The type of bread produced varies based predominantly on the method of mixing, the major flavoring, and the ratio of liquid in the batter. Some batters are thin enough to pour, and others thick enough to mold into lumps.

Pancake batter is made using the stirring method.

Layer cakes and shortbread cookies are made using the creaming method. 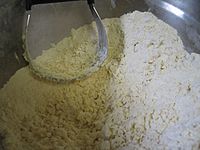 Pie crust is made using the shortening method.

There are three basic methods for making quick breads, which may combine the "rise" of the chemical leavener with advantageous "lift" from other ingredients:

Quick breads also vary widely in the consistency of their dough or batter. There are four main types of quick bread batter:

The above are volumetric ratios and are not based on baker's percentages or weights.

All content from Kiddle encyclopedia articles (including the article images and facts) can be freely used under Attribution-ShareAlike license, unless stated otherwise. Cite this article:
Quick bread Facts for Kids. Kiddle Encyclopedia.