A scone is a kind of bread that is usually shaped into triangles and baked on a griddle or sheet. Scones are very small, and are in the same group as the crumpet or muffin. It is made of wheat, barley, or oatmeal and baking powder to make it rise. The scone is shaped closely like the North American biscuit, and its recipe is almost the same with it as well. Sometimes scones may have raisins, currants, cheese, or dates in them. In the United States, however, scones include more sweet kind of fillings like cranberries, chocolate chips, or nuts. They can often be found in coffee shops and in a great variety in the British Isles. It is generally thought that scones are best eaten when they are very hot and freshly baked right from the oven, accompanied with melting warm butter. Some people even enjoy buttering their scones for themselves.

Scones are connected traditionally with England, Scotland, and Ireland, but nobody knows which country invented it. However, the first known mention of a scone that was printed is from the translation of The Aenaid (1513) written by a Scottish poet named Gavin Douglas.

Scones are related to the ancient Welsh tradition of cooking small round yeast cakes on stones, that later changed to griddles. First-made scones included oats inside them, and were baked over an open fire. However, today's scones are more like American biscuits. They are made with wheat, and baked in the oven. 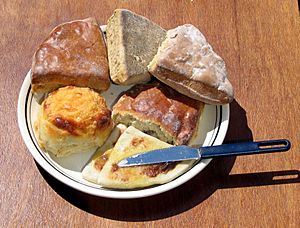 Clockwise from bottom: hot buttered tattie scones next to a cheese scone, shiny and flat treacle scones, and a milk scone above a fruit scone 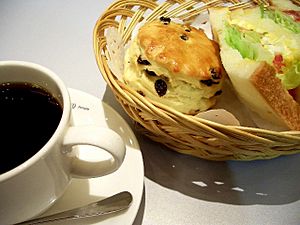 British scones are often lightly sweetened, but may also be savoury. They frequently include raisins, currants, cheese or dates. In Scotland and Ulster, savoury varieties of scone include soda scones, also known as soda farls, and potato scones, normally known as tattie scones, which resemble small, thin savoury pancakes made with potato flour. Potato scones are most commonly served fried in a full Scottish breakfast or an Ulster fry. 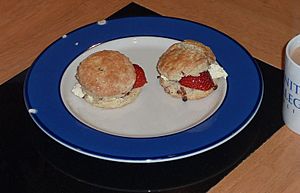 Scone with cream and strawberries 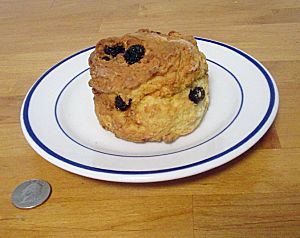 An Irish scone with sultanas

The griddle scone (or "girdle scone" in Scots) is a variety of scone which is cooked on a griddle (or girdle) on the stove top rather than baked in the oven. This usage is also common in New Zealand where scones of all varieties form an important part of traditional colonial New Zealand cuisine.

Other common varieties include the dropped scone, or drop scone, like a pancake, after the method of dropping the batter onto the griddle or frying pan to cook it, and the lemonade scone, which is made with lemonade and cream instead of butter and milk. There is also the fruit scone or fruited scone, which contains currants, sultanas, peel and glacé cherries, which is just like a plain round scone with the fruit mixed into the dough. To achieve lightness and flakiness, scones may be made with cream instead of milk. 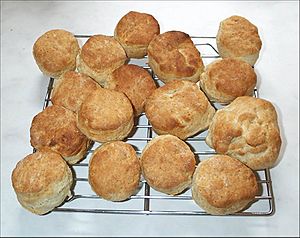 In some countries one may also encounter savoury varieties of scone which may contain or be topped with combinations of cheese, onion, bacon, etc.

Scones can be presented with various toppings and condiments, typically butter, jam and cream. Strawberries are also sometimes used.

Scones were chosen as the Republic of Ireland representative for Café Europe during the Austrian Presidency of the European Union in 2006, while the United Kingdom chose shortbread.

In Hungary, a pastry very similar to the British version exists under the name "pogácsa". The name has been adopted by several neighbouring nations' languages. (E.g. Pogatsche in German.) Pogácsa is almost always savoury and served with varied seasonings and toppings, like dill and cheese.

Pumpkin scones, made by adding mashed cooked pumpkin to the dough mixture, had increased exposure during the period when Florence Bjelke-Petersen was in the public eye. Date scones, which contain chopped dried dates, can also be found in Australia. Another old style of cooking scones, generally in the colder months, is to deep-fry or deep pan-fry them in dripping or oil, when they are called "puftaloons".

Cheese scones are a popular snack sold in cafes or tea shops, where they are commonly served toasted with butter. They are featured in the Edmonds Cookery Book and make up a part of kiwiana.

Round British scones can resemble North American biscuits in appearance, but scones traditionally rely on cold butter, while biscuits are more often made with other kinds of animal fat or vegetable shortening. Also, while scones are frequently (but not always) sweet, and served with coffee and tea, biscuits are served more like a bread roll, often with breakfast in the American South.

In recent years, scones under that name have begun to appear in coffee houses. They may be sweet, often containing fruit such as blueberries or sultanas, or else such flavorings as cinnamon or chocolate chips. US "scones" are usually actually closer to British Rock cakes. They are heavy, dry and crumbly, usually in a triangular or irregular shape.

In Utah and southern Idaho, the bread products locally called "scones" are similar to Native American frybread or New Orleans beignets and are made from a sweet yeast dough, with buttermilk and baking powder or soda added, and they are fried rather than baked. They are customarily served with butter and either honey or maple syrup.

Scones are quite popular in Argentina as well as Uruguay. They were brought there by Irish, English and Scottish immigrants and by Welsh immigrants in Patagonia (Britons are the third largest foreign community in Argentina). They are usually accompanied by tea, coffee or mate.

US-style scones were introduced a decade or so ago in Japan by American coffeehouses such as Starbucks. They are now widely available, not only in coffee shops but in various bakeries. As in the US, these "scones" are similar to Rock cakes and are heavy, dry, crumbly cakes in a triangular or irregular shape, often with fruit such as blueberries or chocolate chips. However raisins or sultanas are very uncommon.

A few restaurants and tea shops specializing in British cuisine do sell authentic British scones, often as part of a Cream tea. For example, the "Afternoon Tea" tea shop chain offers this.

In Scots the verb scon means to crush flat or beat with the open hand on a flat surface, and "scon-cap" or "scone-cap" refers to a man's broad flat cap or "bunnet".

In Australia, scone can be a slang term for the head, usually referring to the crown region.

All content from Kiddle encyclopedia articles (including the article images and facts) can be freely used under Attribution-ShareAlike license, unless stated otherwise. Cite this article:
Scone Facts for Kids. Kiddle Encyclopedia.