In the United States and Canada, a biscuit is a small piece of bread, which after baking usually has a somewhat firm, dry exterior and a soft, crumbly interior. They are usually made with baking powder or baking soda as a chemical leavening agent rather than yeast, and may be called baking powder biscuits to differentiate them from other types. Like other forms of bread, they are often served with butter or other condiments, flavored with other ingredients, or combined with other types of food to make sandwiches or other dishes.

Biscuits, soda breads, cornbread, and similar breads are all considered quick breads, to indicate that they do not need time for the dough to rise before baking.

Biscuits developed from hardtack, which was first made from only flour and water, with later first lard and then baking powder being added. The long development over time and place explains why the word biscuit can, depending upon the context and the speaker's English dialect, refer to very different baked goods. 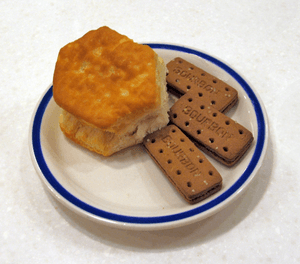 As the English language developed, different baked goods ended up sharing the same name. The soft bread is called a biscuit in North America, and the hard baked goods are called biscuits in the UK.

The definitive explanation for the differences in the usage of biscuit in the English speaking world is provided by Elizabeth David in English Bread and Yeast Cookery. She writes,

It is interesting that these soft biscuits are common to Scotland and Guernsey, and that the term biscuit as applied to a soft product was retained in these places, and in America, whereas in England it has completely died out.

Early European settlers in the United States brought with them a simple, easy style of cooking, most often based on ground wheat and warmed with gravy. Most were not wealthy men and women, and so it was a source of cheap nutrition. A very similar practice was also popular once with the Royal Navy as hard, flour-based biscuits would keep for long journeys at sea but would also become so difficult to chew that they had to be softened up. These were first introduced in 1588 to the rations of ships and found their way into the New World by the 1700s at the latest.

The biscuit emerged as a distinct food type in the early 19th century, before the American Civil War. Cooks created a cheaply produced addition for their meals that required no yeast, which was expensive and difficult to store. With no leavening agents except the bitter-tasting pearlash available, beaten biscuits were laboriously beaten and folded to incorporate air into the dough which expanded when heated in the oven causing the biscuit to rise. In eating, the advantage of the biscuit over a slice of bread was that it was harder, and hence kept its shape when wiping up gravy in the popular combination biscuits and gravy.

In 1875, Alexander P. Ashbourne patented the first biscuit cutter in the US, useful for making cookies, cakes, or baking powder biscuits. It consisted of a board to roll the biscuits out on, which was hinged to a metal plate with various biscuit cutter shapes mounted to it.

1948 ad for Ballard Biscuits as described.

Southern chefs may have had an advantage in creating biscuits. Northern American all-purpose flours, mainly grown in Ohio, Indiana and Illinois, are made from the hard spring wheats that grow in the North's cold-winter climate. Southern American bleached all-purpose flours, originally grown in the Carolinas, Georgia and Tennessee before national food distribution networks, are made from the soft winter wheat that grows in the warm Southern summer. This summer growth results in wheat that has less protein, which is more suited to the creation of quick breads, as well as cookies, cakes and muffins.

Pre-shaped ready-to-bake biscuits can be purchased in supermarkets, in the form of small refrigerated cylindrical segments of dough encased in a cardboard can. These refrigerator biscuits were patented by Ballard and Ballard in 1931.

A typical recipe will include baking powder or baking soda, flour, salt, shortening or butter, and milk or buttermilk. The percentages of these ingredients vary as historically the recipe would pass orally from family to family and generation to generation. Biscuits are almost always a savoury food item. Sugar is rare or included only in small quantities, and was not part of the traditional recipe.

Biscuits can be prepared for baking in several ways. The dough can be rolled out flat and cut into rounds, which expand when baked into flaky-layered cylinders. If extra liquid is added, the dough's texture changes to resemble stiff pancake batter so that small spoonfuls can be dropped into the baking sheet to produce drop biscuits, which are more amorphous in texture and shape.

Although most biscuits are made without yeast, a type of biscuit called an angel biscuit contains yeast as well, as do those made with a sourdough starter.

Biscuits may be eaten for breakfast. They are meant to be served warm with a choice of spread of butter, honey, cane syrup, or some fruit-based jam; otherwise, they are cut in half and become the Southern version of the breakfast sandwich, in which any combination of Country ham, tomato, scrambled eggs, bacon, or sausage is put in the biscuits halves as a filling.

For dinner, they are a popular accompaniment to fried chicken, nearly all types of Southern barbecue, and several Lowcountry dishes. They also often figure in to the Southern version of Thanksgiving dinner as well. 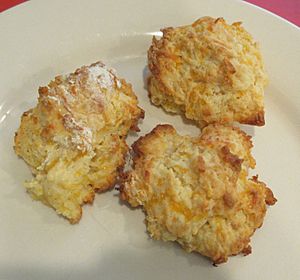 Large drop biscuits, because of their size and rough exterior texture, are sometimes referred to as cat head biscuits.

Biscuits may be flavored with other ingredients. For example, the baker may add grated cheddar or American cheese to the basic recipe to produce cheese biscuits.

Home cooks may use mass-produced, highly processed refrigerator biscuits for a quicker alternative to rolled or drop biscuits.

Biscuits can even be cooked over a campfire on a stick.

A sweet biscuit layered or topped with fruit (typically strawberries) and whipped cream is one type of shortcake.

All content from Kiddle encyclopedia articles (including the article images and facts) can be freely used under Attribution-ShareAlike license, unless stated otherwise. Cite this article:
Biscuit (bread) Facts for Kids. Kiddle Encyclopedia.