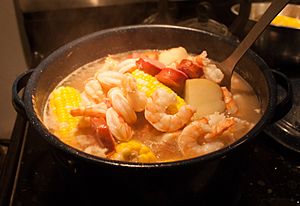 Lowcountry cuisine is the cooking traditionally associated with the South Carolina Lowcountry and the Georgia coast. While it shares features with Southern cooking, its geography, economics, demographics, and culture pushed its culinary identity in a different direction from regions above the Fall Line.

With its rich diversity of seafood from the coastal estuaries, its concentration of wealth in Charleston and Savannah, and a vibrant African cuisine influence, Lowcountry cooking has strong parallels with New Orleans and Cajun cuisine.

The rich estuary system provides an abundance of shrimp, fish, crabs, and oysters that were not available to non-coastal regions prior to refrigeration. The marshlands of South Carolina also proved conducive to growing rice, and that grain became a major part of the everyday diet.

Foods that are traditionally part of Lowcountry cuisine 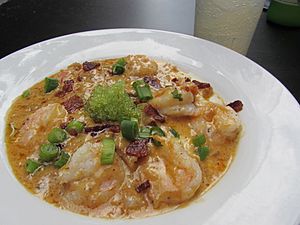 Shrimp and grits at a New Orleans restaurant 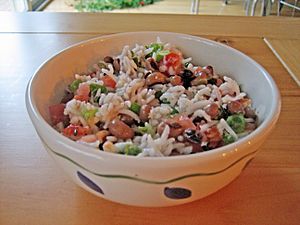 All content from Kiddle encyclopedia articles (including the article images and facts) can be freely used under Attribution-ShareAlike license, unless stated otherwise. Cite this article:
Lowcountry cuisine Facts for Kids. Kiddle Encyclopedia.