In the southern United States, eating Hoppin' John on New Year's Day is thought to bring a prosperous year filled with luck. The peas are symbolic of pennies or coins, and a coin is sometimes added to the pot or left under the dinner bowls. Collard greens, mustard greens, turnip greens, chard, kale, cabbage and similar leafy green vegetables served along with this dish are supposed to further add to the wealth, since they are the color of American currency. Another traditional food, cornbread, can also be served to represent wealth, being the color of gold. On the day after New Year's Day, leftover "Hoppin' John" is called "Skippin' Jenny" and further demonstrates one's frugality, bringing a hope for an even better chance of prosperity in the New Year. 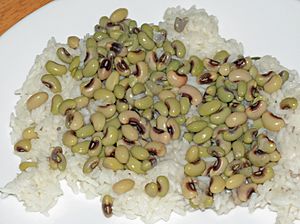 The Oxford English Dictionary's first reference to the dish is from Frederick Law Olmsted's 19th century travelogue, A Journey in the Seaboard Slave States (1861). However, a recipe for "Hopping John" in The Carolina Housewife by Sarah Rutledge, which was published in 1847, is also cited as the earliest reference. An even earlier source is Recollections of a Southern Matron, which mentions "Hopping John" (defined, in a note, as "bacon and rice") as early as 1838. The origins of the name are uncertain; one possibility is that the name is a corruption of the Haitian Creole term for black-eyed peas: pois pigeons, or "pigeon peas" in English.

Hoppin' John was originally a Lowcountry food before spreading to the entire population of the South. Hoppin' John may have evolved from rice and bean mixtures that were the subsistence of enslaved West Africans en route to the Americas. Hoppin' John has been further traced to similar foods in West Africa, in particular the Senegalese dish thiebou niebe.

One tradition common in the United States is that each person at the meal should leave three peas on their plate to ensure that the New Year will be filled with luck, fortune and romance. Another tradition holds that counting the number of peas in a serving predicts the amount of luck (or wealth) that the diner will have in the coming year. On Sapelo Island in the community of Hog Hammock, Geechee red peas are used instead of black-eyed peas. Sea Island red peas are similar.

American chef Sean Brock claims that traditional Hoppin' John was made with Carolina Gold rice, once thought to be extinct, and Sea Island red peas. He has worked with farmers to re-introduce this variety of rice. As of 2017, several rice growers offer Carolina gold rice.

Other bean and rice dishes are seen throughout the American South and the Caribbean, and are often associated with African culinary influence in the Americas. Regional variants include the Guyanese dish "cook-up rice", which uses black-eyed peas and coconut milk; "Hoppin' Juan," which substitutes Cuban black beans for black-eyed peas; the Peruvian tacu-tacu; and the Brazilian dish baião-de-dois, which also often uses black-eyed peas.

All content from Kiddle encyclopedia articles (including the article images and facts) can be freely used under Attribution-ShareAlike license, unless stated otherwise. Cite this article:
Hoppin' John Facts for Kids. Kiddle Encyclopedia.