A ham hock (or hough) or pork knuckle is the joint between the tibia/fibula and the metatarsals of the foot of a pig, where the foot was attached to the hog's leg. It is the portion of the leg that is neither part of the ham proper nor the ankle or foot (trotter), but rather the extreme shank end of the leg bone.

Since this piece generally consists of much skin, tendons and ligaments, it requires long cooking through stewing or braising to be made palatable. The cut of meat can be cooked with greens and other vegetables or in flavorful sauces. It is often added to soups, such as pea and ham soup, with the meat being added to the soup prior to serving. The meat of particularly meaty hocks may be removed and served as is. Ham hocks, like hog jowls (pigs' cheeks), add a distinctive flavor to various dishes. This is particularly true for collard greens, mustard greens, cabbage, green beans and navy beans.

Ham hocks are essential ingredients for the distinct flavor in soul food and other forms of American Southern country cooking. In the Mid-Atlantic States, in rural regions settled by the Pennsylvania Dutch, hocks are a commonly used ingredient for making a kind of meat loaf called scrapple. Eisbein is the name of the joint in north German, and at the same time the name of a dish of roasted ham hock, called Schweinshaxe in Bavaria, Stelze in Austria and Wädli in Switzerland. Golonka is a very popular Polish barbecued dish using this cut. Ham hocks are also popular when boiled with escarole, more commonly called endives, in Italian-American cuisine. Fläsklägg med rotmos is a Swedish dish consisting of cured ham hocks and a mash of rutabaga and potatoes, served with sweet mustard. In Canada, and particularly Montreal, ham hocks are referred to as "pigs' knuckles" and are served in bistros and taverns with baked beans. In northern Italy ham hocks are referred to as stinco, and is often served roast whole with sauerkraut. 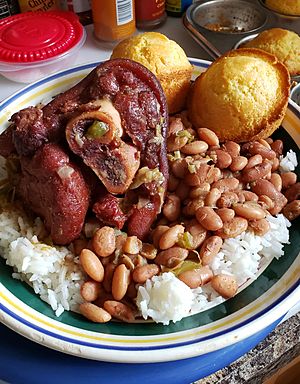 All content from Kiddle encyclopedia articles (including the article images and facts) can be freely used under Attribution-ShareAlike license, unless stated otherwise. Cite this article:
Ham hock Facts for Kids. Kiddle Encyclopedia.