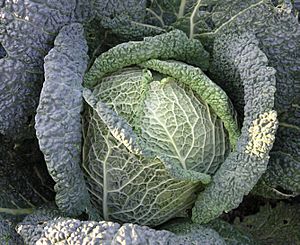 Cabbage or headed cabbage (comprising several cultivars of Brassica oleracea) is a leafy green or purple biennial plant, grown as an annual vegetable crop for its dense-leaved heads. It is descended from the wild cabbage, B. oleracea var. oleracea, and is closely related to broccoli and cauliflower (var. botrytis), Brussels sprouts (var. gemmifera) and savoy cabbage (var. sabauda) which are sometimes called cole crops. Cabbage heads generally range from 0.5 to 4 kilograms (1 to 9 lb), and can be green, purple and white. Smooth-leafed firm-headed green cabbages are the most common, with smooth-leafed red and crinkle-leafed savoy cabbages of both colors seen more rarely. It is a multi-layered vegetable. Under conditions of long sunlit days such as are found at high northern latitudes in summer, cabbages can grow much larger. Some records are discussed at the end of the history section.

Cabbage was most likely domesticated somewhere in Europe before 1000 BC, although savoys were not developed until the 16th century. By the Middle Ages, cabbage had become a prominent part of European cuisine. Cabbage heads are generally picked during the first year of the plant's life cycle, but plants intended for seed are allowed to grow a second year, and must be kept separated from other cole crops to prevent cross-pollination. Cabbage is prone to several nutrient deficiencies, as well as to multiple pests, and bacterial and fungal diseases.

The Food and Agriculture Organization of the United Nations reported that world production of cabbage and other brassicas for 2014 was 71.8 million metric tonnes, with China accounting for 47% of the world total.

Cabbages are prepared in many different ways for eating. They can be pickled, fermented for dishes such as sauerkraut, steamed, stewed, sautéed, braised, or eaten raw. Cabbage is a good source of vitamin K, vitamin C and dietary fiber. Contaminated cabbage has been linked to cases of food-borne illness in humans.

The only part of the plant that is normally eaten is the leafy head; more precisely, the spherical cluster of immature leaves, excluding the partially unfolded outer leaves. The so-called 'cabbage head' is widely consumed raw, cooked, or preserved in a great variety of dishes. Cabbage is a leaf vegetable.

Raw cabbage is usually sliced into thin strips or shredded for use in salads, such as coleslaw. It can also replace iceberg lettuce in sandwiches.

Cabbage is often added to soups or stews. Cabbage soup is popular in central Europe and eastern Europe, and cabbage is an ingredient in some kinds of borscht. Cabbage is also used in many popular dishes in India. Boiling tenderizes the leaves and releases sugars, which leads to the characteristic "cabbage" aroma. Boiled cabbage has become stigmatized in North America because of its strong cooking odor and the belief that it causes flatulence. Boiled cabbage as an accompaniment to meats and other dishes can be an opportune source of vitamins and dietary fiber. Cabbage rolls are an East European and Middle Eastern delicacy. The leaves are softened by parboiling or placing the whole head of cabbage in the freezer, and then filled with chopped meat and/or rice.

Cabbage is the basis for the German sauerkraut, Chinese suan cai and Korean kimchi. To pickle cabbage it is placed in a jar, covered with water and salt, and left in a warm place for several days to ferment. Sauerkraut was historically prepared at home in large batches, as a way of storing food for the winter. Cabbage can also be pickled in vinegar with various spices, alone or in combination with other vegetables. Korean baechu kimchi is usually sliced thicker than its European counterpart, and the addition of onions, chillies, minced garlic and ginger is common.

Cabbage is an excellent source of Vitamin C. It also contains significant amounts of glutamine, an amino acid, which has anti-inflammatory properties.

There are many varieties of cabbage based on shape and time of maturity. Traditional varieties include "Late Flat Dutch", "Early Jersey Wakefield" (a conical variety), "Danish Ballhead" (late, round -headed). Savoy Cabbage has a round head with crinkled leaves. Red cabbage is a small, round headed type with dark red leaves. Krautman is the most common variety for commercial production of sauerkrauts. 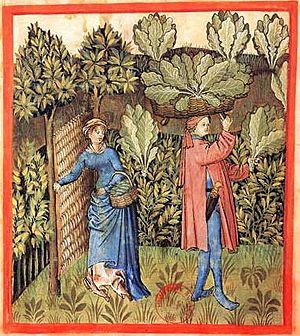 Broadly speaking, cabbage varieties come in two groups, early and late. The early varieties mature in about 45 days. They produce small heads which do not keep well and are intended for consumption while fresh. The late cabbage matures in about 87 days, and produces a larger head.

Cabbage can be started indoors or sowed directly. Like all brassicae, cabbage is a cool season crop, so early and late plantings do better than those maturing in the heat of the summer.

Control of insect pests is important, particularly in commercial production where appearance is a driver of success. The pesticides sevin and malathion are both listed for use on cabbage. The caterpillars of some butterflies in the family Pieridae (the "whites") feed on brassicas and can be serious pests; see also List of Lepidoptera that feed on Brassica.

Cabbages keep well and were thus a common winter vegetable before refrigeration and long-distance shipping of produce.

China is the leader in production of cabbages followed by India and then the Russian Federation.

Besides cabbage proper, the species Brassica oleracea has many distinctive cultivars which are commonly known by other names. They include: broccoli (Italica Group); Brussels sprouts (Gemmifera Group), whose edible small green heads resemble diminutive cabbages; Chinese kale or Chinese broccoli (Alboglabra Group); cauliflower (Botrytis Group), whose flower cluster is used as a vegetable; kale or spring greens, a very hardy cabbage (Acephala group) that has curled, often finely cut leaves which do not form a dense head, and that is considered by some to be the original form of the cultivated cabbage; collard greens, a type of kale; and kohlrabi (Gongylodes Group), having an edible stem that becomes greatly enlarged, fleshy and turnip-shaped. Hybrids include broccolini (Italica × Alboglabra Group), broccoflower (Italica × Botrytis Group) and choumoelliera or marrow cabbage (cabbage, kohlrabi and kale).

There are two species of Chinese cabbbage (lettuce cabbage, pakchoi, pechay) from Asia that somewhat resemble cabbage and are widely used as greens: Brassica chinensis, bok choy or celery cabbage, which forms a loose, chardlike head of dark green leaves, and Brassica pekinensis, or pe-tsai (peh-tsai), forming an elongated compact head of broad, light green leaves. Rape, an annual herb (Brassica napus) of European origin but known only as a cultigen, differs from the cabbage in its deeply lobed leaves, which are not hairy like those of the turnip.

A number of other plants bear the name "cabbage" or are likened to it by their appearance, though many are not food plants with parts for human consumption.

All content from Kiddle encyclopedia articles (including the article images and facts) can be freely used under Attribution-ShareAlike license, unless stated otherwise. Cite this article:
Cabbage Facts for Kids. Kiddle Encyclopedia.