Kale is a vegetable with green or purple leaves. It is also called borecole. It is in the group of vegetables called Brassica oleracea or wild cabbage. It is cruciferous because of the shape of its flowers.

A plant that would have been first cultivated in the Mediterranean area, it was called in these times cabbage well before the well rounded variety existed. Kale was a significant crop in Roman times; it became a basic staple for peasants in the Middle Ages and it was brought in the United States by the English in the XVII century.

Kale is one of the most resistant from the cabbage family; it can support temperatures as low as -­15 °C but it doesn’t sustain high temperatures. Since it resists to cold temperatures and grows easily, kale was for a long time a very appreciated winter vegetable especially in Scotland, Germany, Holland and Scandinavia. Today, it is eaten the world over.

Kale has large stringy leaves, very curly, with a well-marked flavor. Their color varies from pale green to dark green, sometimes to blue-tinted green. Those leaves are not well rounded, a characteristic expressed by the Latin word which describes this variety of cabbage « acephala » and which means « without head ». Those leaves surmount a fine whitish and very fibrous stem, it can measure from 30 to 40 cm. Kale is so decorative that ornamental varieties were developed. 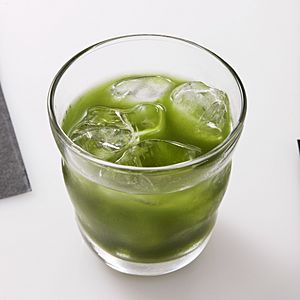 Aojiru is a Japanese vegetable drink most commonly made from kale 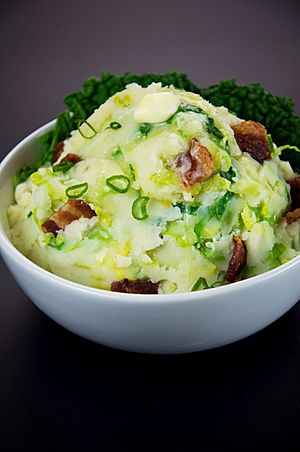 Colcannon is a traditional Irish dish of mashed potatoes with kale 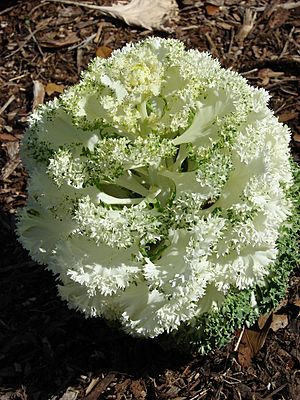 Ornamental kale at the Dallas Arboretum and Botanical Garden 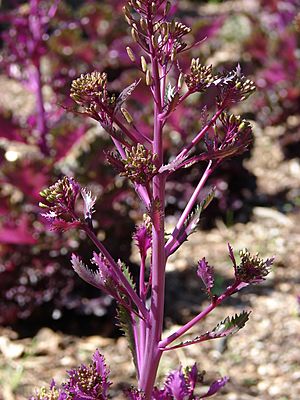 Kale is rarely eaten raw. We can add it sparingly to salads. It transmits its well-marked taste to soups and stews. You can blanch it to attenuate its flavour. Kale is delicious coated with sauce, sprinkled with cheese or in purée (alone or with mashed potatoes).

Choose kale with firm leaves, well colored and relatively small, without stain or mold. One cup cooked makes 130 grams. Cut the leaves around the stem, cut the core, separate each leaf. Wash well with running water or with vinegary water to remove dirt and bugs that could remain. Cook kale in water or steam it from 20 to 30 min, braised in a slow cooker, stuffed or sautéed in a wok.

Put the kale leaves very tight rather than loose in refrigerator without washing it, inside a perforated plastic bag. It can be kept in this way from five to ten days, but it is more flavorful and less bitter when it is eaten quickly. Kale can be frozen after having been blanched two to three minutes, until the leaves soften a bit.

All content from Kiddle encyclopedia articles (including the article images and facts) can be freely used under Attribution-ShareAlike license, unless stated otherwise. Cite this article:
Kale Facts for Kids. Kiddle Encyclopedia.