Sourdough bread is made by the fermentation of dough using naturally occurring lactobacilli and yeast. It uses biological leavening rather than cultivated baker's yeast. The lactic acid produced by the lactobacilli gives it a more sour taste and improved keeping qualities.

In the Encyclopedia of Food Microbiology, Michael Gaenzle writes: "The origins of bread-making are so ancient that everything said about them must be pure speculation. One of the oldest sourdough breads dates from 3700 BCE and was excavated in Switzerland, but the origin of sourdough fermentation likely relates to the origin of agriculture in the Fertile Crescent several thousand years earlier ... Bread production relied on the use of sourdough as a leavening agent for most of human history; the use of baker's yeast as a leavening agent dates back less than 150 years."

Pliny the Elder described the sourdough method in his Natural History:

Generally however they do not heat it up at all, but only use the dough kept over from the day before; manifestly it is natural for sourness to make the dough ferment... (Nat. His. 18:26 §104)

Sourdough remained the usual form of leavening down into the European Middle Ages. Im modern times, barm from the beer brewing process replaced it, at first. Later, there was specially grown yeast.

Bread made from 100% rye flour is popular in the northern half of Europe. It is usually leavened with sourdough. Baker's yeast is not useful as a leavening agent for rye bread, because rye does not contain enough gluten. The structure of rye bread is based primarily on the starch in the flour, as well as other carbohydrates known as pentosans. however, rye amylase is active at much higher temperatures than wheat amylase, causing the structure of the bread to disintegrate as the starches are broken down during cooking. The lowered pH of a sourdough starter, therefore, inactivates the amylases when heat cannot, allowing the carbohydrates in the bread to gel and set properly. In the southern part of Europe, where panettone was originally made with sourdough, sourdough has become less common in recent times. It has been replaced by the faster-growing baker's yeast. Sometimes longer fermentation rests are used to allow for some bacterial activity to build flavor.

In English-speaking countries, wheat-based breads arte more common. Sourdough is no longer the standard method for bread leavening. It was gradually replaced, first by the use of barm from beer making, then, after the confirmation of germ theory by Louis Pasteur, by cultured yeasts. Although sourdough bread was superseded in commercial bakeries in the 20th century, it has undergone a revival among artisan bakers.

Manufacturers of non-sourdough breads make up for the lack of yeast and bacterial culture by introducing into their dough an artificially-made mix known as bread improver or flour improver. 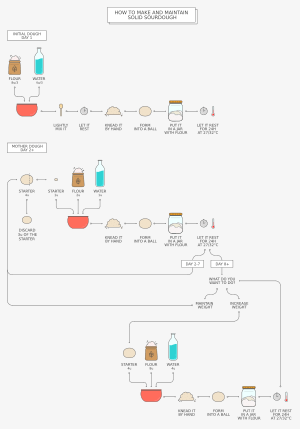 How to make and maintain firm sourdough

The preparation of sourdough begins with a pre-ferment (the "starter" or "leaven", also known as the "chief", "chef", "head", "mother" or "sponge"), a fermented mixture of flour and water, containing a colony of microorganisms including wild yeast and lactobacilli. The purpose of the starter is to produce a vigorous leaven and to develop the flavour of the bread. In practice there are several kinds of starters.

Flour already contains different kinds of yeast and bacteria spores. When flour comes in contact with water, the enzyme amylase breaks down the starch into different sugars. The yeast which is part of sourdough, can use these sugars. The mixture will develop into a stable bacteria culture, which will use fermentation. The yeast will produce carbon dioxide as a by-product of fermentation, which will leaven the dough.

Obtaining a satisfactory rise from sourdough takes longer than a dough leavened with baker's yeast because the yeast in a sourdough is less vigorous. In the presence of lactic acid bacteria, however, some sourdough yeasts have been observed to produce twice the gas of baker's yeast. The acidic conditions in sourdough, along with the bacteria also producing enzymes that break down proteins, result in weaker gluten and may produce a denser finished product.

Refreshment of the starter 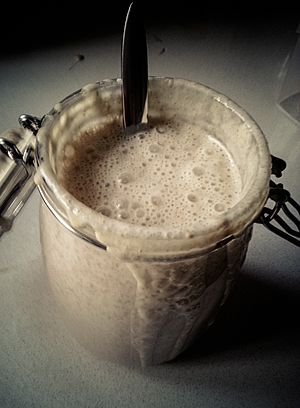 As it ferments, sometimes for several days, the volume of the starter is increased by periodic additions of flour and water, called "refreshments". As long as this starter culture is fed flour and water regularly it will remain active.

The ratio of fermented starter to fresh flour and water is critical in the development and maintenance of a starter. This ratio is called the refreshment ratio. Higher refreshment ratios are associated with greater microbial stability in the sourdough. In San Francisco sourdough, the ratio is 40% of the total weight, which is roughly equivalent to 67% of the new-dough's weight. A high refreshment ratio keeps acidity of the refreshed dough relatively low. Acidity levels of below pH 4.0 inhibit lactobacilli and favour acid-tolerant yeasts.

A starter prepared from scratch with a salted wheat-rye dough takes about 54 hours at 27 °C (81 °F) to stabilise at a pH between 4.4 and 4.6. 4% salt inhibits L. sanfranciscensis, while C. milleri can withstand 8%.

A drier and cooler starter has less bacterial activity and more yeast growth, which results in the bacterial production of more acetic acid relative to lactic acid. Conversely, a wetter and warmer starter has more bacterial activity and less yeast growth, with more lactic acid relative to acetic acid. The yeasts produce mainly CO2 and ethanol. High amounts of lactic acid are desired in rye and mixed-rye fermentations, while relatively higher amounts of acetic acid are desired in wheat fermentations. A dry, cool starter produces a sourer loaf than a wet, warm one. Firm starters (such as the Flemish Desem starter, which may be buried in a large container of flour to prevent drying out) tend to be more resource-intensive than wet ones.

A stable culture in which L. sanfranciscensis is the dominant bacterium requires a temperature between 25–30 °C (77–86 °F) and refreshments every 24 hours for about two weeks. Refreshment intervals of longer than three days acidify the dough and may change the microbial ecosystem.

The intervals between refreshments of the starter may be reduced in order to increase the rate of gas (CO2) production, a process described as "acceleration." In this process, the ratio of yeasts to lactobacilli may be altered. Generally, if once-daily refreshment-intervals have not been reduced to several hours, the percentage amount of starter in the final dough should be reduced to obtain a satisfactory rise during proof.

Faster starter processes, requiring fewer refreshments, have been devised, sometimes using commercial sourdough starters as inoculants. These starters generally fall into two types. One is made from traditionally maintained and stable starter doughs, often dried, in which the ratios of microorganisms are uncertain. Another is made from microorganisms carefully isolated from Petri dishes, grown into large, homogeneous populations in fermentors, and processed into combined baker's products with numerically defined ratios and known quantities of microorganisms well suited to particular bread styles.

The starter must be fed 4 to 12 hours prior to being added to dough, by mixing flour and water to the starter. This creates an active leaven, which should grow in size and is ready to use when it is bubbly and floats in water. The leaven is mixed with flour and water to make a final dough of the desired consistency. The starter weight is usually 13% to 25% of the total flour weight, though formulas may vary. The dough is shaped into loaves, left to rise, and then baked. A number of 'no knead' methods are available for sourdough bread. Due to the length of time sourdough bread takes to proof, many bakers may refrigerate their loaves prior to baking. This process is known as 'retardation' to slow down the proofing process. This process has the added benefit of developing a richer flavoured bread.

Because the rise time of most sourdough starters is longer than that of breads made with baker's yeasts, sourdough starters are generally unsuitable for use in a bread machine. However, sourdough that has been proved over many hours, using a sourdough starter or mother dough, can then be transferred to the machine, utilizing only the baking segment of the bread-making program, bypassing timed mechanical kneading by the machine's paddle. This may be convenient for single loaf production, but the complex blistered and slashed crust characteristics of oven-baked sourdough bread cannot be achieved in a bread making machine, as this usually requires the use of a baking stone in the oven and misting of the dough to produce steam. Furthermore, ideal crust development requires loaves of shapes not achievable in a machine's loaf tin.

All content from Kiddle encyclopedia articles (including the article images and facts) can be freely used under Attribution-ShareAlike license, unless stated otherwise. Cite this article:
Sourdough Facts for Kids. Kiddle Encyclopedia.