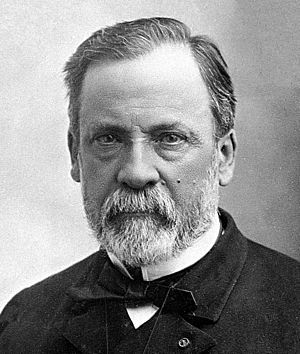 Louis Pasteur (December 27, 1822 – September 28, 1895) was a French microbiologist and chemist. He and his wife, Marie, are best known for their experiments supporting the germ theory of disease, and he is also known for his vaccinations, most notably the first vaccine against rabies. He made many discoveries in the field of chemistry, including the asymmetry (different shapes) of crystals. He is also well known for his way of keeping milk and wine from going sour for longer periods of time. That process is called pasteurization.

Pasteur's later work on diseases included work on chicken cholera. During this work, Pasteur noticed how a culture of the responsible bacteria had spoiled, and it failed to induce the disease in some chickens, which he was infecting, with the disease.

He was the director of the Pasteur Institute, established in 1887, until his death, and his body was interred in a vault beneath the institute.

Louis Pasteur was born on December 27, 1822 in Dole in the Jura region of France, into the family of a poor tanner. Louis grew up in the town of Arbois. He gained degrees in Letters and in Mathematical Sciences before entering the École Normale Supérieure, an elite college. After serving briefly as professor of physics at Dijon Lycée in 1848, he became professor of chemistry at the University of Strasbourg, where he met and courted Marie Laurent, daughter of the university's rector, in 1849.

Louis Pasteur and Marie were married on May 29, 1849, and together had five children. Only two survived to adulthood; his other three children had died of typhoid fever. These personal tragedies inspired Pasteur to try to find cures for diseases, such as typhoid.

In 1895 at Marnes-la-Coquette, a commune in Paris, Pasteur died after several strokes.

All content from Kiddle encyclopedia articles (including the article images and facts) can be freely used under Attribution-ShareAlike license, unless stated otherwise. Cite this article:
Louis Pasteur Facts for Kids. Kiddle Encyclopedia.