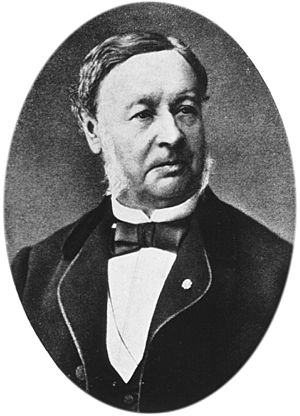 Theodor Schwann (7 December 1810 – 11 January 1882) was a German scientist who isolated and named the enzyme pepsin. He also played a key role in promoting the idea of the cell as the foundation of living organisms. His work on the cell has recently been re-assessed, because the idea had been discussed before him.

Cells were discovered by Robert Hooke (1635–1703). He used a compound microscope with two lenses to look at the structure of cork, and to look at leaves and some insects. He did this from about 1660, and reported it in his book Micrographica in 1665.

Leeuwenhoek's discoveries and drawings of 'little animalcules' opened up a whole new world for naturalists. Protozoa, and microorganisms generally were discovered. Christian Gottfried Ehrenberg's book Die Infusionsthierchen summarised what was known in 1838. Lorenz Oken (1779–1851) in 1805 wrote that infusoria (microscopic forms) were the basis of all life.

The work of the Czech Jan Purkyně (1787–1869) and his student and collaborator Gabriel Valentin (1810–1883) was "unjustly denigrated by the nationalistic Germans. They have a claim to some priority in the cell theory".Chapter 9

Johannes Müller (1801–1858) also made great contributions. It was, however, his student Theodor Schwann and Matthias Schleiden (1804–1881) who got the credit for the cell theory, despite the fact that some of their observations were not correct, and their credits to previous workers were "a travesty".p97 As understood now, the cell theory includes these important ideas:

The key works of Schwann and Schleiden were published in 1838 and 1839. These ideas still are the basic ideas of cell theory.

All content from Kiddle encyclopedia articles (including the article images and facts) can be freely used under Attribution-ShareAlike license, unless stated otherwise. Cite this article:
Theodor Schwann Facts for Kids. Kiddle Encyclopedia.