An ovum (Latin: "egg", plural: ova) is the name for the haploid female reproductive cell, or gamete. Both animals and land plants (embryophytes) produce ova. 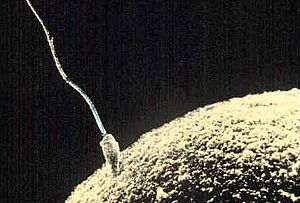 A sperm cell fusing with an ovum

Ova are made and released by a female's ovaries. At birth, a female has all of her eggs, and from puberty, she releases an egg once a month until none are left. This is called oogenesis.

The ovum is the largest cell in the human body. You can see it without a microscope. The human ovum is between 100 and 200 µm long. They are nevertheless much smaller than the cleidoic eggs laid externally by reptiles and birds, which is why they need a long period of internal development in the womb.

The sexual cycle is quite different in other mammals, whose females are only receptive during their 'heat', which triggers the release of eggs from the ovary.

In many plants, ova are made inside archegonia through meiosis. The archegonium has a long 'neck' with the egg cell inside. When the egg is mature, the neck opens and sperm swims in to fertilize the egg.

All content from Kiddle encyclopedia articles (including the article images and facts) can be freely used under Attribution-ShareAlike license, unless stated otherwise. Cite this article:
Ovum Facts for Kids. Kiddle Encyclopedia.