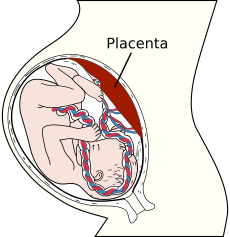 The placenta is a temporary organ found in eutherian female mammals while they are pregnant.

The placenta protects the mother and fetus

The placental barrier protects the fetus

The placenta has two parts, one of which is genetically and biologically part of the fetus, the other part of the mother. It is implanted in the wall of the uterus, where it receives nutrients and oxygen from the mother's blood and passes out waste. This forms a barrier called the placental barrier, which filters out some substances which could harm the fetus.

Some infectious diseases may also cross this barrier and infect the fetus.

In other types of mammals

Prototherial (egg-laying) and metatherial (marsupial) mammals produce a type of placenta that provides nutrients mostly from the egg sac, instead of from the mother's blood. It is positioned in the female's body similar to eutherian mammals. Some snakes and lizards have evolved a system of internal development with a placenta-like tissue: this is an example of convergent evolution.

All content from Kiddle encyclopedia articles (including the article images and facts) can be freely used under Attribution-ShareAlike license, unless stated otherwise. Cite this article:
Placenta Facts for Kids. Kiddle Encyclopedia.