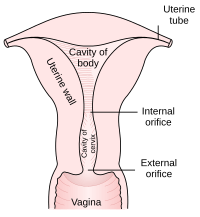 The uterus or womb is the part of the female body in which babies grow for nine months during pregnancy. The uterus is just under the fallopian tubes, between the hips. The plural of uterus is 'uteri'.

All content from Kiddle encyclopedia articles (including the article images and facts) can be freely used under Attribution-ShareAlike license, unless stated otherwise. Cite this article:
Uterus Facts for Kids. Kiddle Encyclopedia.