Menstruation or menses is when a female has blood come out of her vagina for 2–7 days every month. A slang word for menses is a "period".

Inside the thick part of the uterus are blood vessels and other nutrients that a baby will need to grow. If an ovum in the uterus gets fertilized, it sticks to the wall of the uterus and starts to grow. However, if the ovum is not fertilized, it does not stick. The uterus then gets rid of the ovum and the extra tissue by releasing it from the body. The tissue and blood flows out of the uterus through the vagina. This is called menstruation or having a period. The bleeding normally lasts about 3-5 days, though some girls may bleed longer or have a bit of bleeding between periods. The uterus then starts preparing for another ovum. For most girls, the time between their periods is about one month. For about 2 years after menstruation starts, the time between periods is not always the same. Some girls may skip a month, or have 2 periods close to each other. It is also normal to have cramps (rather painful squeezing feelings) or to feel bloated (swollen up) in the abdomen at periods. When many girls start having periods, they begin using sanitary napkins or tampons to soak up the blood and tissue. A sanitary napkin is a piece of material that absorbs (takes in) liquids which is worn between the vulva and underpants. A tampon is a stick of absorbent material that is placed in the vagina. 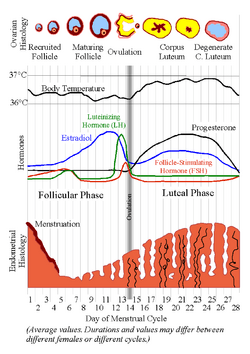 A chart telling about the cycle

Before women begin their menses, there is cloudy white liquid-like fluid that comes out of the vaginal wall and eventually leaks on to their underwear. A girl begins this cycle about a year before the actual menstruating happens. When the liquid turns a deep brownish colour, the leaking starts to become often. After the leaking stops, which is within a year of it first happening then she begins to menstruate for 3–5 days. Once the experience becomes normal and adjusts to the body function, then she will leak about 2–7 days.

Most women menstruate for 3–5 days every month. However, anywhere from 2–7 days is normal. The amount of blood lost is normally about 50ml. Women usually use a pad or a tampon to keep the blood from staining their undergarments.

All content from Kiddle encyclopedia articles (including the article images and facts) can be freely used under Attribution-ShareAlike license, unless stated otherwise. Cite this article:
Menstruation Facts for Kids. Kiddle Encyclopedia.