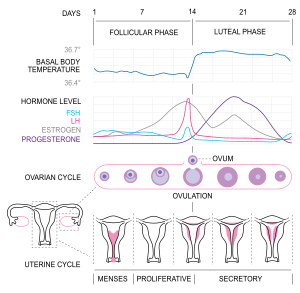 Notice how each graph relates to the others

The menstrual cycle has three stages: the Follicular stage, Ovulation, and the Luteal (or premenstrual) stage. The cycle will stop if the woman gets pregnant (if a fertilized egg implants itself into the lining of the uterus).

This stage is the start of the menstrual cycle, and is counted as day one of the cycle. This stage starts when the amount of progesterone and estrogen in a woman's blood drop. This causes the endometrium - the thick lining of the uterus - to leave the woman's body through menstruation. It will appear as bleeding from the vagina. This stage lasts from 4–6 days.

At the start of this stage, the pituitary gland will begin to release more FSH. This will continue for 3-4 days. The FSH makes several follicles grow in one of the ovaries. Each follicle contains an immature ova (egg). These follicles create estrogen.

Usually, the amount of FSH in the body peaks during the third or fourth day of menstruation. All but one of the follicles dies off. The one that is left releases even more estrogen. Once again, the lining of the uterus thickens. Near the end of the stage, a woman's estrogen levels peak. This causes the pituitary gland to release LH, which also peaks at this time. 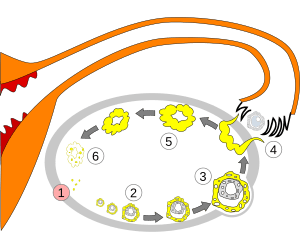 The ova leaves the follicle and enters the oviduct

Ovulation happens if there is both a rise in estrogen and a peak in LH at the end of the follicular stage. The rising levels of LH make the ovum mature. The follicle that contains the ovum swells and breaks open. (In the next stage, the leftover cells of the follicle turn into an important structure called the corpus luteum.) The ovum is released into the Fallopian tube.

During ovulation, a woman's body temperature is usually about 0.5 degrees Celsius over normal.

The follicle cells that used to hold the ovum now release progesterone into the body. This causes the endometrium to get even thicker.

If an ovum is going to be fertilized, it happens during this step. A woman becomes pregnant when a man's sperm fertilizes one of her ova, which then plants itself into the lining of the uterus.

If the ovum is fertilized during Ovulation, it will become a zygote. It will start to copy itself over and over again through mitosis. It will also move from the ovarian duct into the uterus. The levels of estrogen and progesterone in the body remain high. The zygote grows into an embryo and implants itself into the endometrium tissue of the uterus. This forms a placenta, which starts to mature.

After fertilization, the menstrual cycle stops so the embryo can continue to mature for the next 9 months. Progesterone and estrogen levels will stay high until the fetus is ready to be birthed.

Eventually, after giving birth, a woman's menstrual cycle will return to the way it was before she got pregnant.

Then, the cycle begins again.

All content from Kiddle encyclopedia articles (including the article images and facts) can be freely used under Attribution-ShareAlike license, unless stated otherwise. Cite this article:
Menstrual cycle Facts for Kids. Kiddle Encyclopedia.