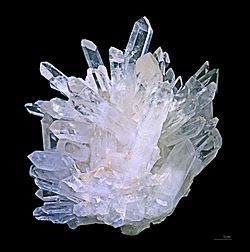 A crystal or crystalline solid is a solid material whose constituents (such as atoms, molecules, or ions) are arranged in a highly ordered microscopic structure, forming a crystal lattice that extends in all directions.

In addition, single crystals are usually identifiable by their geometrical shape, consisting of flat faces with specific, characteristics. The scientific study of crystals and crystal formation is known as crystallography.

Examples of large crystals include snowflakes, diamonds, and table salt.

By volume and weight, the largest concentrations of crystals in the Earth are part of its solid bedrock. Crystals found in rocks typically range in size from a fraction of a millimetre to several centimetres across, although exceptionally large crystals are occasionally found. As of 1999[update], the world's largest known naturally occurring crystal is a crystal of beryl from Malakialina, Madagascar, 18 m (59 ft) long and 3.5 m (11 ft) in diameter, and weighing 380,000 kg (840,000 lb).

Other rock crystals have formed from fluids, commonly water, to form quartz veins. Water-based ice in the form of snow, sea ice and glaciers is a very common manifestation of crystalline or polycrystalline matter on Earth. A single snowflake is typically a single crystal, while an ice cube is a polycrystal.

All content from Kiddle encyclopedia articles (including the article images and facts) can be freely used under Attribution-ShareAlike license, unless stated otherwise. Cite this article:
Crystal Facts for Kids. Kiddle Encyclopedia.