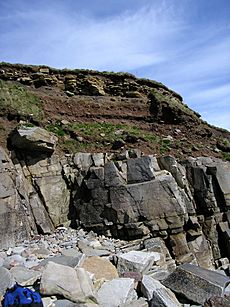 In stratigraphy, bedrock is the common term for solid rock under the surface of the Earth. Above the bedrock is usually an area of broken and weathered rock, soil, sand, pebbles, etc.

The top of the bedrock is known as the rockhead and identifying this, via excavations, drilling or geophysical methods, is an important task in most civil engineering projects. Loose material on top (known as drift) can be extremely thick, so that the bedrock lies hundreds of meters below the surface.

A 'solid' geologic map of an area will usually show the rock that would be exposed at the surface if all soil or other superficial deposits were removed.

All content from Kiddle encyclopedia articles (including the article images and facts) can be freely used under Attribution-ShareAlike license, unless stated otherwise. Cite this article:
Bedrock Facts for Kids. Kiddle Encyclopedia.