Beryl is a silicate mineral, and is the main ore of beryllium metal. It is sometimes found as very, very large crystals, as much as 18 m. (59 ft.) long. Colored clear beryl is often used for jewelry, including emerald (green), aquamarine (bluegreen), bixbite (red), morganite (pink), and heliodor (golden). 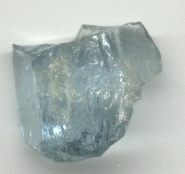 Aquamarine (from Latin: aqua marina, "water of the sea") is a blue or turquoise variety of beryl. It occurs at most localities which yield ordinary beryl, some of the finest coming from Russia. The gem-gravel placer deposits of Sri Lanka contain aquamarine. Clear yellow beryl, such as that occurring in Brazil, is sometimes called aquamarine chrysolite. When corundum presents the bluish tint of typical aquamarine, it is often termed Oriental aquamarine. The deep blue version of aquamarine is called maxixe. Its color fades to white when exposed to sunlight or is subjected to heat treatment, though the color returns with irradiation.

In the United States, aquamarines can be found at the summit of Mt. Antero in the Sawatch Range in central Colorado. In Wyoming, aquamarine has been discovered in the Big Horn Mountains, near Powder River Pass. In Brazil, there are mines in the states of Minas Gerais, Espírito Santo, and Bahia, and minorly in Rio Grande do Norte. The Mines of Colombia, Zambia, Madagascar, Malawi, Tanzania and Kenya also produce aquamarine. 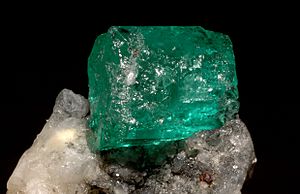 Emeralds in antiquity were mined by the Egyptians and in Austria, as well as Swat in northern Pakistan. A rare type of emerald known as a trapiche emerald is occasionally found in the mines of Colombia.

A trapiche emerald exhibits a "star" pattern; it has raylike spokes of dark carbon impurities that give the emerald a six-pointed radial pattern. It is named for the trapiche, a grinding wheel used to process sugarcane in the region.

Colombian emeralds are generally the most prized due to their transparency and fire. Some of the most rare emeralds come from three main emerald mining areas in Colombia: Muzo, Coscuez, and Chivor.

Fine emeralds are also found in other countries, such as Zambia, Brazil, Zimbabwe, Madagascar, Pakistan, India, Afghanistan and Russia. In the US, emeralds can be found in Hiddenite, North Carolina. In 1998, emeralds were discovered in the Yukon. 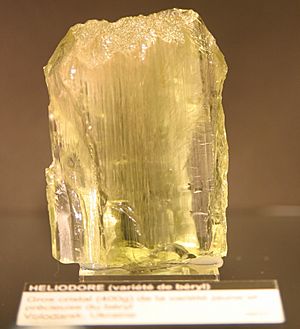 Golden beryl can range in colors from pale yellow to a brilliant gold. Unlike emerald, golden beryl has very few flaws. Both golden beryl and heliodor are used as gems. Probably the largest cut golden beryl is the flawless 2054 carat stone on display in the Hall of Gems, Washington, D.C. 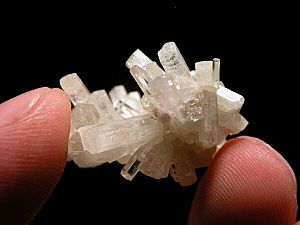 Colorless beryl is called goshenite. The name originates from Goshen, Massachusetts where it was originally discovered.

Goshenite is found to some extent in almost all beryl localities. In the past, goshenite was used for manufacturing eyeglasses and lenses owing to its transparency. Nowadays, it is most commonly used for gemstone purposes and also considered as a source of beryllium.

The gem value of goshenite is relatively low. However, goshenite can be colored yellow, green, pink, blue and in intermediate colors by irradiating it with high-energy particles. The resulting color depends on the content of Ca, Sc, Ti, V, Fe, and Co impurities.

Morganite, also known as "pink beryl", "rose beryl", "pink emerald", and "cesian (or caesian) beryl", is a rare light pink to rose-colored gem-quality variety of beryl. Orange/yellow varieties of morganite can also be found, and color banding is common. It can be routinely heat treated to remove patches of yellow and is occasionally treated by irradiation to improve its color. The pink color of morganite is attributed to Mn2+ ions.

Pink beryl of fine color and good sizes was first discovered on an island on the coast of Madagascar in 1910. It was also known, with other gemstone minerals, such as tourmaline and kunzite, at Pala, California. In December 1910, the New York Academy of Sciences named the pink variety of beryl "morganite" after financier J. P. Morgan. 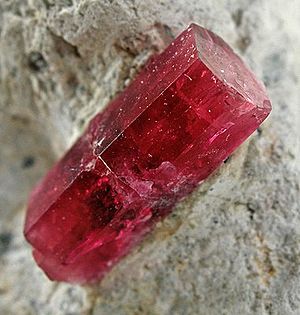 Red beryl (also known as "red emerald" or "scarlet emerald") is a red variety of beryl. It was first described in 1904 for an occurrence, its type locality, at Maynard's Claim (Pismire Knolls), Thomas Range, Juab County, Utah. The old synonym "bixbite" is deprecated from the CIBJO, because of the risk of confusion with the mineral bixbyite (also named after the mineralogist Maynard Bixby). The dark red color is attributed to Mn3+ ions.

Red beryl is very rare and has only been reported from a handful of locations including: Wah Wah Mountains, Beaver County, Utah; Paramount Canyon, Sierra County, New Mexico; Round Mountain, Sierra County, New Mexico; and Juab County, Utah. The greatest concentration of gem-grade red beryl comes from the Violet Claim in the Wah Wah Mountains of mid-western Utah, discovered in 1958 by Lamar Hodges, of Fillmore, Utah, while he was prospecting for uranium.

All content from Kiddle encyclopedia articles (including the article images and facts) can be freely used under Attribution-ShareAlike license, unless stated otherwise. Cite this article:
Beryl Facts for Kids. Kiddle Encyclopedia.