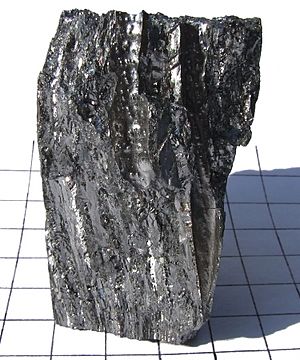 Beryllium is in group 2 of the periodic table, so it is an alkaline earth metal. It is grayish (slightly gray) in color. It has an atomic number of 4 and is symbolized by the letters Be. It is toxic and should not be handled without proper training.

Beryllium has 4 electrons, 4 protons, and 5 neutrons.

Beryllium has one of the highest melting points of the light metals: 1560 K (1287 °C). It is added to other metals to make stronger alloys. Beryllium-copper alloy is used in tools because it does not make sparks.

At standard temperature and pressure, beryllium resists oxidation when exposed to oxygen.

Beryllium is best known for the chemical compounds it forms. Beryllium combines with aluminium, silicon and oxygen to make a mineral called beryl. Emerald and aquamarine are two varieties of beryl which are used as gemstones in jewelry.

Since it has a very high stiffness to weight ratio, beryllium is used to make the diaphragms in some high-end speakers.

It is a relatively rare element in the universe. It usually occurs when larger atomic nuclei have split up. In stars, beryllium is depleted because it is fused and builds larger elements.

All content from Kiddle encyclopedia articles (including the article images and facts) can be freely used under Attribution-ShareAlike license, unless stated otherwise. Cite this article:
Beryllium Facts for Kids. Kiddle Encyclopedia.