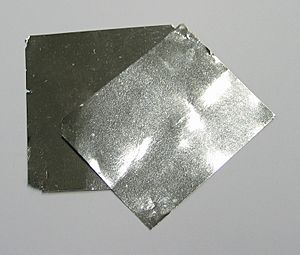 A small foil of Iridium

Iridium is the 77th element on the periodic table. Its symbol is Ir. Ir's atomic number(the amount of protons) is 77.

Iridium is a metal. Like other metals in the platinum group, Iridium is a rare and expensive "noble metal" and is a transition metal. It looks like platinum and is found in asteroids and comets. Iridium deposits are used to identify relative dates of collisions of foreign bodies. Iridium can fold and bend just like aluminum, and remains very shiny. Most iridium is found in the Americas, though some is mined in Myanmar, South Africa, and Russia. Iridium melts at 2410 °C, and boils at 4130 °C. It is the most corrosion resistant metal.

Iridium is not needed in the body.

All content from Kiddle encyclopedia articles (including the article images and facts) can be freely used under Attribution-ShareAlike license, unless stated otherwise. Cite this article:
Iridium Facts for Kids. Kiddle Encyclopedia.