Kids Encyclopedia Facts
This page is about the metal. For the United States 5 cent coin, see nickel (coin). 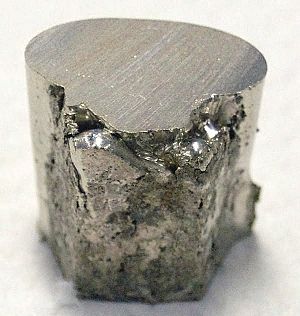 A chunk of nickel metal

Nickel (chemical symbol Ni) is an element. It has an atomic number of 28 and an atomic mass of about 58.69amu. It has 28 protons. It is a transition metal.

Nickel is a silver-white metal. It is easily polished (made shiny). It is magnetic. It is not magnetic when heated above 355 °C (671 °F). It is not soft like many other metals. It can be stretched into wires easily. It is not radioactive.

Nickel is not a reactive metal. It dissolves slowly in acids. It does not rust like iron. It makes a thin coating of nickel(II) oxide which stops more corrosion. Aluminium does a similar thing. 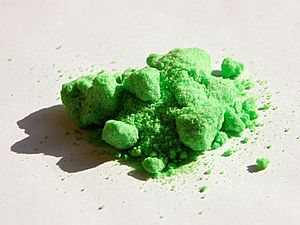 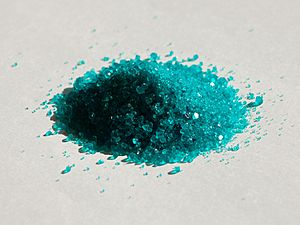 Nickel(II) compounds are not highly reactive. They are normally green or blue. They are toxic and irritate skin. Some of them are carcinogens.

Nickel(III) compounds are black or gray.

At least 26 radioisotopes of nickel have been found. The most stable radioisotope is 59Ni which has a half-life of 76,000 years. Nickel also has one meta state.

Nickel was found when an ore that looked like copper did not make copper metal. Later it was found that the ore actually had a new metal, called nickel. Nickel was isolated as a metal and classified as a chemical element by Axel Fredrik Cronstedt in 1751. At first, the copper colored nickel ore was the only source. Later, it was made as a byproduct of cobalt blue making. 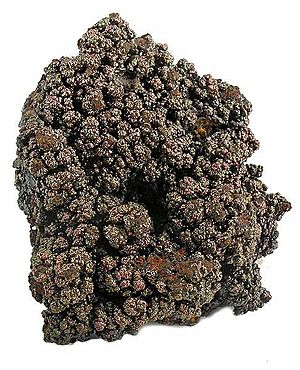 Nickel is normally found in minerals, and not as a metal in the ground. Sometimes meteorites have nickel and iron metal in them. The most common nickel mineral is pentlandite. Most of the nickel on Earth is thought to be in the Earth's outer and inner cores. There are sulfidic and lateritic nickel ores. Philippines mines the most nickel. Other major mining countries are Russia, Canada and Australia.

Nickel is found in both laterite and sulfide ores. They are heated to melt them and concentrate them. They are also separated by oils. Nickel is made from its sulfide by heating it in air. This oxidizes the sulfide to sulfur dioxide, leaving liquid nickel behind. This nickel is not yet pure and not ready for use.

Pure nickel with a nickel content greater than 99% is made in an electrolytic process. In this process, the nickel is dissolved in bath of sulfuric acid. When the pure nickel sticks to cathodes hanging into the bath, the impurities remain in the sulfuric acid or at the bottom of the bath. These impurities are very interesting, as they can contain precious metals. 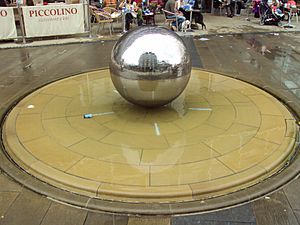 Nickel is used to make many products like stainless steel, alnico magnet, coinage, rechargeable batteries, electric guitar strings, microphone capsules and plating on plumbing fixtures. It is used as a green tint in glass.

Nickel and its alloys are used as catalysts for hydrogenation reactions. Nickel is used as a binder in the cemented tungsten carbide.

63Ni is used in krytron devices as a beta particle emitter to make ionization by the keep-alive electrode more reliable. Raney nickel is used for hydrogenation of unsaturated oils to make margarine.

Nickel can irritate skin. That is why jewelry that releases nickel ions is bad for some people. Some nickel salts are carcinogens. Nickel is not as toxic as other metals such as mercury but it is still toxic.

All content from Kiddle encyclopedia articles (including the article images and facts) can be freely used under Attribution-ShareAlike license, unless stated otherwise. Cite this article:
Nickel Facts for Kids. Kiddle Encyclopedia.