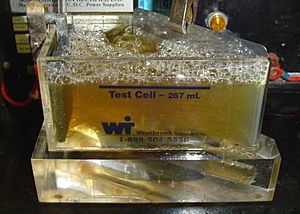 A zinc solution tested in a hull cell

Electroplating is the coating of an object with a metal. It is done by immersing the object and a bar of the metal in a solution containing the metal ions. Electric current is then applied; the positive goes to the metal and the negative goes to the object. The metal bar dissolves in the solution and plates out on the object, forming a thin but durable coating of metal. It is often used to gold-plate objects for decoration or to stop corrosion. Normally the metal becomes fragile, and is only used for display.

Electroplating changes the chemical, physical, and mechanical properties of the workpiece. An example of a chemical change is when nickel plating improves corrosion resistance. An example of a physical change is a change in the outward appearance. An example of a mechanical change is a change in tensile strength or surface hardness which is a required attribute in tooling industry. Electroplating of acid gold on underlying copper- or nickel-plated circuits reduces contact resistance as well as surface hardness. Copper-plated areas of mild steel act as a mask if case hardening of such areas are not desired. Tin-plated steel is chromium-plated to prevent dulling of the surface due to oxidation of tin.

Electroplating, or electroless plating may be used as a way to render a metal part radioactive, by using a aqueous solution prepared from nickel–phosphorus concentrates which contain radioactive hypophosphite 32P ions. Such a part might be used for the purposes of brachytherapy. 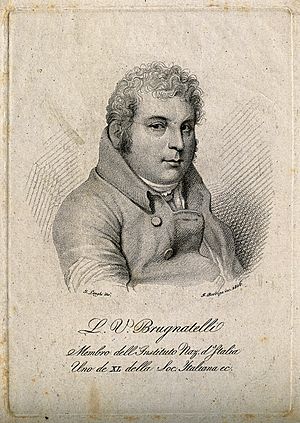 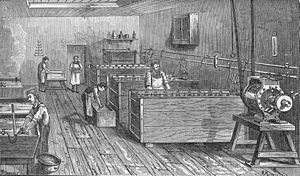 Modern electrochemistry was invented by Italian chemist Valentino Brugnatelli in 1805. Brugnatelli used his colleague Alessandro Volta's invention of five years earlier, the voltaic pile, to facilitate the first electrodeposition. Brugnatelli's inventions were suppressed by the French Academy of Sciences and did not become used in general industry for the following thirty years. By 1839, scientists in Britain and Russia had independently devised metal deposition processes similar to Brugnatelli's for the copper electroplating of printing press plates. 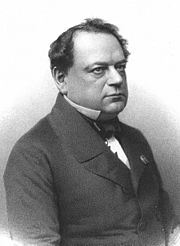 Boris Jacobi in Russia not only rediscovered galvanoplastics, but developed electrotyping and galvanoplastic sculpture. Galvanoplastics quickly came into fashion in Russia, with such people as inventor Peter Bagration, scientist Heinrich Lenz and science fiction author Vladimir Odoyevsky all contributing to further development of the technology. Among the most notorious cases of electroplating usage in mid-19th century Russia were gigantic galvanoplastic sculptures of St. Isaac's Cathedral in Saint Petersburg and gold-electroplated dome of the Cathedral of Christ the Saviour in Moscow, the tallest Orthodox church in the world. 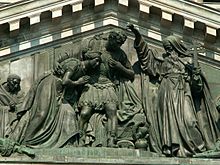 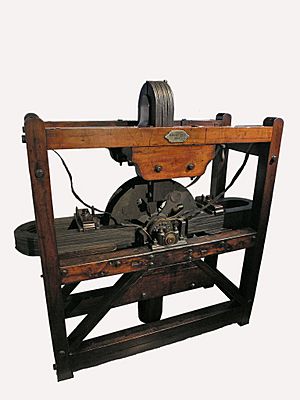 Soon after, John Wright of Birmingham, England discovered that potassium cyanide was a suitable electrolyte for gold and silver electroplating. Wright's associates, George Elkington and Henry Elkington were awarded the first patents for electroplating in 1840. These two then founded the electroplating industry in Birmingham from where it spread around the world. The Woolrich Electrical Generator of 1844, now in Thinktank, Birmingham Science Museum, is the earliest electrical generator used in an industrial process. It was used by Elkingtons.

The Norddeutsche Affinerie in Hamburg was the first modern electroplating plant starting its production in 1876.

The plating industry received a big boost with the advent of the development of electric generators in the late 19th century. With the higher currents available, metal machine components, hardware, and automotive parts requiring corrosion protection and enhanced wear properties, along with better appearance, could be processed in bulk.

One of the American physicist Richard Feynman's first projects was to develop technology for electroplating metal onto plastic. Feynman developed the original idea of his friend into a successful invention, allowing his employer (and friend) to keep commercial promises he had made but could not have fulfilled otherwise.

Electroplating is widely used in various industries for coating metal objects with a thin layer of a different metal. The layer of metal deposited has some desired property, which the metal of the object lacks. For example, chromium plating is done on many objects such as car parts, bath taps, kitchen gas burners, wheel rims and many others or the fact that chromium is very corrosion-resistant, and thus prolongs the life of the parts. It is also used in making inexpensive jewelry.

All content from Kiddle encyclopedia articles (including the article images and facts) can be freely used under Attribution-ShareAlike license, unless stated otherwise. Cite this article:
Electroplating Facts for Kids. Kiddle Encyclopedia.