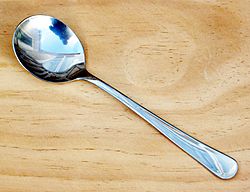 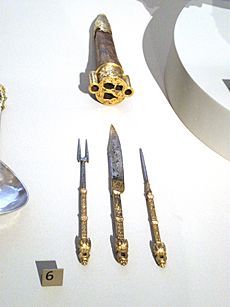 Cutlery includes any hand implement used in preparing, serving, and especially eating food in the Western world. A person who makes or sells cutlery is called a cutler. The city of Sheffield in England has been famous for the production of cutlery since the 17th century and a train – the Master Cutler – running from Sheffield to London was named after the industry.

Cutlery is more usually known as silverware or flatware in the United States, where cutlery usually means knives and related cutting instruments. Although the term silverware is used irrespective of the material composition of the utensils, the term tableware has come into use to avoid the implication that they are made of silver.

The major items of cutlery in the Western world are the knife, fork and spoon, or the sporf which combines all three.

The word cutlery derives from the Middle English word 'cuteler' and this in turn derives from Old French 'coutelier' which comes from 'coutel'; meaning knife (modern French: couteau). The word's early origins can be seen in the Latin word 'culter' (knife).

The first documented use of the term "cutler" in Sheffield appeared in a 1297 tax return. A Sheffield knife was listed in the King's possession in the Tower of London fifty years later. Several knives dating from the 14th century are on display at the Cutlers' Hall in Sheffield. 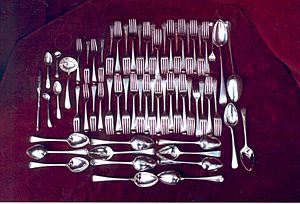 A set (known as a canteen) of Georgian era silver cutlery, including ladles, and serving spoons. The thin item on the left is a marrow scoop for eating Bone marrow

Sterling silver is the traditional material from which good quality cutlery is made (hence the usage of the term in the United States). Historically, silver had the advantage over other metals of being less chemically reactive. Chemical reactions between certain foods and the cutlery metal can lead to unpleasant tastes. Gold is even less reactive than silver, but the use of gold cutlery was confined to the exceptionally wealthy, such as monarchs.

Steel was always used for more utilitarian knives, and pewter was used for some cheaper items, especially spoons. From the nineteenth century, electroplated nickel silver (EPNS) was used as a cheaper substitute for sterling silver.

In 1913, the British metallurgist Harry Brearley discovered stainless steel by chance and this metal has come to be the predominant one used in cutlery. An alternative is melchior, corrosion-resistant nickel and copper alloy, which can also sometimes contain manganese and nickel-iron. 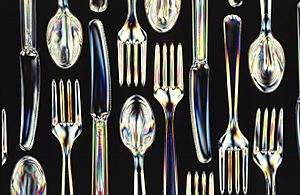 Introduced for convenience purposes (lightweight, no cleanup after the meal required), disposable cutlery made of plastic has become a huge worldwide market. Along with other disposable tableware (paper plates, plastic table covers, disposable cups, paper napkins, etc.), these products have become essential for the fast food and catering industry. The products are part of a throw-away societies and the cause of millions of tons of non-biodegradable plastic waste. 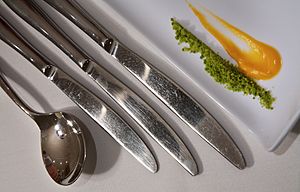 Traditional centres of cutlery-making include:

All content from Kiddle encyclopedia articles (including the article images and facts) can be freely used under Attribution-ShareAlike license, unless stated otherwise. Cite this article:
Cutlery Facts for Kids. Kiddle Encyclopedia.