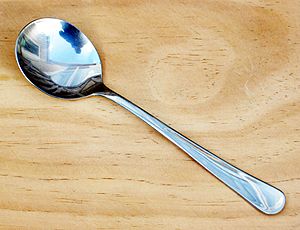 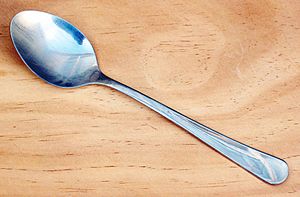 A spoon is a tool for eating. It is usually used for eating foods that are like liquids (like soup and yogurt), and it can also be used for stirring. Humans use spoons every day. Spoons are mostly useful for eating liquids, such as soup, although some solids (like cereal and ice cream) are also usually eaten with spoons. A ladle is a type of serving spoon used for soup, stew, or other foods.

There are many different types of spoons. There are dessert spoons, soup spoons, baby spoons, teaspoons, tablespoons and others. There are also spoons that are collector items and are worth a lot of money. Some musicians even use two spoons as a musical instrument like a castanet.

Spoons have been used as tools for eating since Paleolithic times. Prehistoric peoples probably used shells, or small pieces of wood as spoons. Both the Greek and Latin words for spoon come from the word cochlea, which is a spiral-shaped snail shell. The Anglo-Saxon word spoon, means a chip or splinter of wood.

All content from Kiddle encyclopedia articles (including the article images and facts) can be freely used under Attribution-ShareAlike license, unless stated otherwise. Cite this article:
Spoon Facts for Kids. Kiddle Encyclopedia.