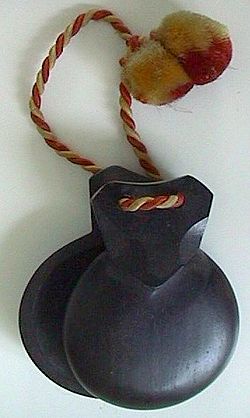 A pair of castanets

Castanets are percussion instruments which come from Spain. They are often used in an orchestra. Castanets are hollowed-out wooden shells. A hardwood such as ebony or rosewood is used.

Castanets are used in pairs. Traditionally two pairs are played together, one pair held in each hand. There is a string which passes through small holes in the shells. The player winds the string around the thumb and finger so that the two shells can be clicked together. The two pairs of castanets used are slightly different sizes so that they make a slightly different pitch. The higher pair, known as hembra (female), is usually held in the right hand, with the larger macho (male) pair held in the left.

Castanets are traditionally played by singers and dancers. Spanish folk dancers often use castanets. They are often associated with flamenco dancing.

When they are played in an orchestra they are often attached to a stand. The technique of playing is therefore different. They can be tapped by the fingers and palm of the hand. They are often used in music which is supposed to sound Spanish. In ballet and opera they are used to accompany Spanish dances. Carmen, the character in Bizet's opera Carmen, sings a song and accompanies herself on the castanets. Usually the opera singer does not have the skill to play them, so the castanets are played by a percussion player in the orchestra while Carmen pretends to be playing them.

All content from Kiddle encyclopedia articles (including the article images and facts) can be freely used under Attribution-ShareAlike license, unless stated otherwise. Cite this article:
Castanets Facts for Kids. Kiddle Encyclopedia.