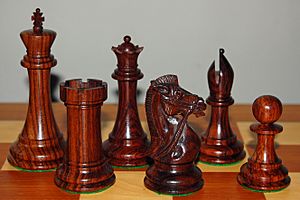 Rosewood is wood from trees of the genus Dalbergia.

The wood of Dalbergia nigra is known as "Brazilian rosewood", and also as "Bahia rosewood".It has a strong, sweet smell, which lasts for many years.

Another rosewood comes from Dalbergia latifolia known as (East) Indian rosewood or sonokeling (Indonesia). It is native to India and is also grown in plantations elsewhere in Pakistan (Chiniot).

Madagascar rosewood (Dalbergia maritima), known as bois de rose, is highly prized for its red colour. It is overexploited in the wild. A 2010 moratorium on trade and illegal logging is being ignored.

Throughout southeast Asia Dalbergia oliveri is harvested for use in woodworking. It has a fragrant odour. Dalbergia cultrata is being used and sold as D. olvieri.

All content from Kiddle encyclopedia articles (including the article images and facts) can be freely used under Attribution-ShareAlike license, unless stated otherwise. Cite this article:
Rosewood Facts for Kids. Kiddle Encyclopedia.